Papers from industrial school for boys date back to 1875 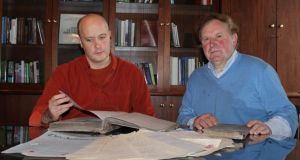 The department of history at University Of Limerick has expressed interest in a rare collection of west Limerick historical documents dating from as early as 1875. The archives, which document the students of Glin Industrial School for Boys, came into the possession of Tom Wall, author of The Last Boy in Glin Industrial School, who is the last surviving pupil to live in Limerick.

Dr Vincent O’Connell of UL, who specialises in public history and cultural heritage in 20th-century Ireland, has acknowledged the outstanding merit of the collection, stating that “one of the aims of public history must be to affect change in the present”.

Dr O’Connell says: “In devoting attention to such important documents as those being donated to the University of Limerick by Tom Wall, we not only have an opportunity to shine a light into the darkest corners of our country’s recent past, but we may also ignite awareness of the treatment of the most vulnerable in our society in the present.”

In 1952, Wall was the last child to be put into Glin Industrial School for Boys at three years of age. More than 60 years later, he is looking to preserve what remains of a much forgotten part of Irish history.

“I am very glad I’ve lived to see the day where this can be talked about out in the open the way it should be,” Wall says. “I want these documents to be preserved and showcased so that we can educate people about what happened and what it was like to live in those institutions.”

Wall wants to hand over the documents to UL despite the possible enactment of a 100-year embargo. He discovered the collection at the industrial school in 1973. “At the time I was looking for my own file, which was meant to be burned,” he says. He describes the 2,000 documents he saw that day as being “just a fraction” of what had existed before. “They wanted everything destroyed,” he says. “They didn’t want anything with a connection to the place surviving, so I took these and put them in my attic, should they be needed in the future for people to learn from history.”

Wall has close to 900 documents but he would like to have them archived for research and educational purposes. The documents include roll books, as well as individual records of student behaviour and punishment, health and family history.

He also has photographs of “parties” that were thrown on occasions where outside visitors were allowed into the school. “These parties were all staged,” he says. “All the boys were told to look happy and some are even wearing party hats. We were warned not to eat all the fancy food because outsiders might have realised how hungry we were.”

Glin Industrial School was the second largest of its kind for senior boys in Ireland. It was run by the Christian Brothers but, according to Wall, it was kept a “national secret” until the Ryan report in May 2009.

“The whole thing had always been under lock and key, scrutinised by the Christian Brothers. It wasn’t until Justice Ryan uncovered information that revealed what was going on that it was given any attention, but we were terrified it would just be another big cover up.”

Wall, who says he has “never left Glin”, is determined to have these archives brought into the public eye due to an increased amount of recent interest in the history of industrial schools.

“A lot of these people never spoke to anyone about what happened, they didn’t want to, they couldn’t deal with it or bring it all up again.”

He explains how the relatives of some of the victims are now in regular contact with him from as far away as Australia and Canada. “It’s only now that it’s coming into the public interest again as so many younger generations are asking questions and looking for answers. They want to know why 35,000 children were locked away in these schools.”

Wall, who has recorded his personal memoirs of the time in his book , admits that some people find his story disturbing but he believes it is a storythat needs to be told. “I couldn’t see the point in writing this book without including the whole truth,” he says. “We never wanted compensation, all we wanted was the truth to be told and for it to be believed.”

e says it was “virtually impossible” to seek justice for the abuse to which he was e was subjected. “I never got an apology. We were told we were exaggerating.”

Ken Bergin, head of the special collections department at the Glucksman Library at UL, says the library is in negotiation with Wall about his collection of papers. Bergin says the library is offering to assess, clean and preserve this “important collection” with the aim of making it available to researchers.

Access to the archive will be determined by data protection legislation protecting the rights of those individuals who feature in the papers.