The Ana Liffey Drug Project and Humans of Dublin launch a new exhibition called 'People Like Us', a series of portraits and stories focusing on people affected by drug use, at Unit 3 on James Joyce Street. 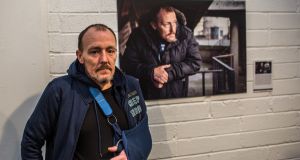 William Power stands in front of his portrait which was taken as part of the ‘People Like Us’ exhibition which opened on Thursday. Photograph: James Forde

Those at the launch included William Power (44), who said he came from a troubled family.

“My father used ask me to hide his guns. I was running around with them feeling proud and special. He got locked up for armed robbery and later for child abuse but he was closest to me.

“My mother said I was out of control, maybe I was. As much as a nine year old can be.”

He was put into care.

“I was sent to the Christian Brothers. That place was hell on earth and the Brothers were the devils. They did some horrible, horrible things to us. I used to self harm trying to deal with it and I would overdose on whatever drugs I could get my hands on.

“I went into care for not attending school and came out as a drug dealer. I was sent into prison for dealing drugs and came out an armed robber.”

Mr Power said he ended up on the streets for years.

“Ended up on drugs. Being using drugs for years. To escape. Because when I was put into care I was abused. I was abused in there but I hid it for years and I used to take drugs to block it out.”

He said he faced up to it last year.

“I put myself into rehab last year and came out of rehab and been doing great ever since. Couldn’t be doing any better. Without Ana Liffey I wouldn’t be standing here today, that’s a fact.”

Mr Power was speaking at the ‘People Like Us’ photographic portrait exhibition of people whose lives have been blighted by drugs in Dublin’s North East Inner City. His portrait is part of the exhibition which was launched by Lord Mayor Nial Ring on Thursday morning.

Humans of Dublin has worked with Ana Liffey Drug Project to produce the exhibition involving people that Ana Liffey have been working with through their Assertive Case Management Team in the North East Inner City.

Lord Mayor of Dublin Nial Ring launched the exhibition in Unit 3 James Joyce Street, which will be open again on Friday. In the New Year it will be taken around the city centre, both North and South inner city.

Dawn Russell, head of services with the Ana Liffey Drug Project, said the purpose of the exhibition was “ to show the faces and hear the voices of people we work for in the North East Inner City and to help the community understand their life stories, their drug and alcohol problems, and to destigmatise them within their own community.”

Details of the exhibition tour can be found at saferfromharm.ie.