Abandonment of ‘Grace’ for 20 years has cost her dearly

High Court award of €6.3m just part of huge cost to both ‘Grace’ and the taxpayer 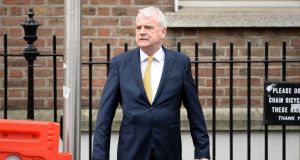 The cost to “Grace” of her abandonment in a “foster” home for 20 years, where she suffered gross physical and emotional abuse, is incalculable and can never be compensated.

The High Court award to her on Thursday of a €6.3 million package is but one tranche of how much this monumental scandal will also cost the taxpayer.

The case before Mr Justice Peter Kelly was the fifth inquiry into what happened, and why, at that home in the rural south-east.

The story of “Grace” was first broken by now Irish Times journalist Sarah Bardon in the Irish Mirror in February 2015, where she reported “allegations of sexual and physical abuse of up to 40 children at a foster home” were not being properly investigated by the HSE.

In fact, the horrendous case may turn out to be one of the most-investigated in the history of the State.

In November last year a report by Conor Dignam SC into “certain issues relating to a former foster home in the south-east” was published, followed in February this year by publication of both the 2012 Conal Devine report into “Service User 1 [ie Grace]” and the 2015 Disability Foster Care report by Resilience Ireland.

The publications of these three reports followed public horror at what was coming out at the Public Accounts Committee on the case, in late 2015 and last year.

Ironically, it was perhaps one of the least heinous failings in this case – the deficiencies in the HSE’s account to PAC, in January 2016, on whether it had apologised to Grace – that prompted full public ventilation of the case and finally prompted a robust political reaction.

Then minister of state for disabilities Kathleen Lynch commissioned the Dignam report, and, in response to it, the current Minister, Finian McGrath, last month appointed senior counsel Marjorie Farrelly to lead a commission of investigation into how not only Grace’s case was mishandled, but also into the experiences of 47 other children and vulnerable adults in the home.

Of these, we know the family of at least one made credible allegations of serious sexual abuse at the foster home.

Ms Farrelly has been given 12 months to conduct her investigation, and a budget of €7.5 million has been put aside for the task.

The crucial unknown in the “Grace” case is why, in October 1996, a decision made earlier that year to remove Grace from the home was overturned and she was left there for another 13 years.

The Devine report shows differences in how those involved in that decision remember it being made.

In truth, we may never know why those at that “care meeting” concluded leaving Grace in the home was the correct course for her, and the South-Eastern Health Board (SEHB).

Many have surmised it was because Grace had just turned 18 and was no longer under the responsibility of childcare services.

There is also speculation of a deep fear that the historical failure of the SEHB to adequately monitor the “foster” home, or to investigate credible allegations of abuse there, would be revealed if the SEHB were to go into a court to seek Grace’s wardship at that moment in 1996.

Better to leave her there, perhaps, than look into that “appalling vista”.

Whatever the reasoning for that catastrophic failing, it continues to come at a high cost to Grace, and the taxpayer.