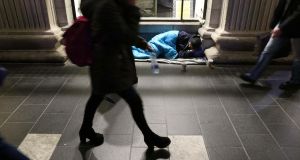 The numbers of homeless children in Dublin, and nationally, are now at their highest rate since records began.

The latest figures, published on Tuesday by the Department of Housing, show there were 2,137 children in emergency accommodation in Dublin during the week of March 20th-26th, with a national total of 2,563 homeless children.

The Dublin figure compares with 2,129 in February, and represents a 24 per cent increase on the March 2016 figure of 1,723 homeless children in the capital.

Minister for Housing Simon Coveney has reiterated his pledge that there will be no homeless child accommodated in a hotel or B&B by July 1st.

Sinn Féin spokesman on housing, Eoin Ó Broin, however, said it was clear Mr Coveney was “failing homeless families”. He said there had been 11 “straight months” of homelessness increases.

A spokesman for the department said that although homelessness continued to increase, “much was being done to address homelessness and secure sustainable tenancies for homeless households. For example, housing authorities assisted in more than 3,000 sustainable exits from homelessness during 2016”.

The “spring” rough-sleeper count, conducted on the night of April 4th, found 138 people on the capital’s streets as well as 57 people on roll-out beds on the floor of the Merchants Quay night cafe, bringing the number of people unable to access an emergency bed on the night to 195.

The latest figures represent a 3 per cent decrease on the 142 people found sleeping rough on November 22nd, the night of the “winter count”. However, this slight decrease is offset by the fact that an additional 220 emergency beds have been provided in Dublin since that count.

In addition to the 195 adults unable to access emergency beds on April 4th, there were 3,093 homeless adults in emergency accommodation – of which 1,355 were accompanied by 2,041 homeless children. The total homeless population in Dublin was 5,329.

Not included in the count was a group of Romanian men, thought to number about 20, who had arrived in Dublin in recent weeks having apparently been promised work in construction. A Dublin Region Homeless Executive spokeswoman said a team had been working with the men and more than half had “now been successfully repatriated”.

Of the 138 people found on the streets, 72 per cent were in Dublin city, with the rest found outside the city area, in Finglas, south Dublin and Dún Laoghaire. A total of 85 were Irish nationals, 13 non-Irish and the nationality of 40 could not be ascertained on the night.

Pat Doyle, chief executive of the Peter McVerry Trust, described the latest figures as “disappointing” saying they underlined the challenges in securing housing for people to move out of homelessness.

*The twice-annual rough-sleeper counts are the only official counts and are provided by Dublin Region Homeless Executive.