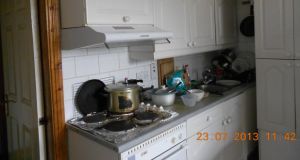 Substandard: a kitchen in a Dublin property 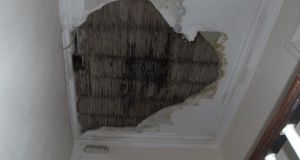 Substandard: a ceiling damaged by severe damp in a Dublin property 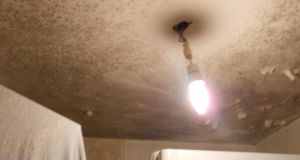 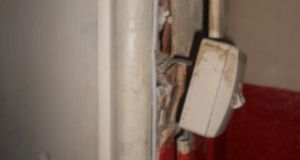 Damaged fitting in a Dublin property 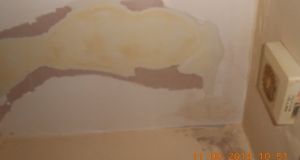 Substandard: a damp patch on a wall in a Dublin property 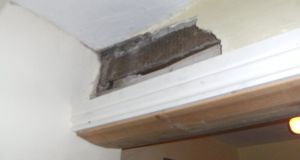 Substandard: plaster missing from a wall in a Dublin property

Almost 90 per cent of private rented dwellings in Dublin inspected by environmental health officers (EHOs) over a two-year period were found to be in breach of housing standards legislation, an unpublished report has found.

Some 5,105 units were inspected, by six Dublin City Council EHOs, between May 2012 and April this year, as part of a three-year Intensified Inspection Programme.

Of these, 4,470, or 87.5 per cent, were deemed “non-compliant” with legislation governing standards in private rented accommodation.

By the end of April this year, however, following the issuing of enforcement orders, almost 60 per cent (2,676 ) of those in breach had been brought up to standard.

Some 40 per cent (1,774 units) of those in breach of standards were deemed to be “ongoing cases” at the end of April, with legal action against landlords under way in respect of 75 units. Forty-one of these 75 units are on the North Circular Road.

The Intensified Inspection Programme is a three-year push on the part of the council to bring some of the lowest quality accommodation in the city up to acceptable standards.

The ongoing programme is targeted at parts of the city with high concentrations of what are commonly referred to as “pre-63” properties. Among the areas inspected were Rathmines, Ranelagh, South Circular Road and Ballyfermot on the southside and Drumcondra, North Circular Road, Stoneybatter and Belvedere Place on the northside.

On Dominick Street Upper, Dublin 1, for example, where 26 units in three buildings were inspected, 25 – or 96 per cent – were in breach of housing standards. Each one was non-compliant with standards on refuse storage, lighting, food preparation and storage and sanitary facilities. At the end of April and following enforcement notices to the landlord(s), none had been brought up to standard.

Following enforcement notices, none had been brought to compliance.

In contrast, on Sherrard Street Lower, Dublin 1, where all 89 units in 10 buildings inspected breached housing standards, all but one had been brought up to standard.

In the six months since the report was compiled, a further 923 rented properties have been brought into compliance, according to a council spokeswoman. “This has had a significant impact on tenants’ quality of life and on the city environs in general,” she said.

The programme is due to continue until March, alongside the council’s routine inspections of private rented dwellings.

Among the breaches found by EHOs were:

Live exposed wires in bathrooms, in halls and outdoors

Plaster collapsing from a ceiling

A toilet on the landing