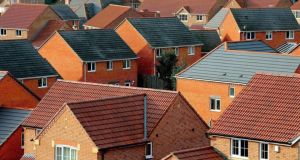 The need for rent control is one of the chief demands of the newly formed Housing Action Now group, which met in Dublin last night. Photograph: Rui Vieira/PA Wire

Housing groups from across Dublin have come together to demand a legally enforceable right to housing and a “radical change in housing policy”.

The inaugural meeting of Housing Action Now (HAN) in Dublin last night was attended by over 200 community activists, trade unionists as well as public representatives.

A four-page manifesto was published, setting out a series of “solutions to the housing crisis” under four headings – the private rented sector, the mortgage crisis, social housing and Traveller accommodation.

Rent control is among the demands listed, along with an end to landlords’ right to refuse rent supplement, a moratorium on all evictions by banks, mortgage write-downs, large-scale State investment in social housing construction, the re-generation of existing housing stock to the highest standards and that local authorities must be compelled to deliver Traveller specific accommodation.

John Bisset, a community worker from Rialto, chaired the meeting, saying successive Governments’ housing policy relied on the market model “which doesn’t cater for the needs of people”.

“We have been working with the European Action Coalition for the Right to Housing and the City, which fights on two fronts – for the right to urban space which should be a democratic space, not a series of spaces are locked away and only certain people can access them, and for the right to housing.”

The European coalition has member housing rights groups in Italy, Germany, Greece, Spain, France, Hungary and Portugal. Some have held mass open assemblies on housing rights, while others have blocked sheriffs’ attempts to evict people from their homes and also occupied vacant buildings demanding they be given over to housing.

The meeting was attended by members of housing groups in Blanchardstown, Dun Laoghaire, the inner city, Rialto, the St Michael’s Estate and O’Devaney Gardens flats in Dublin, and Moyross in Limerick, as well as some academics and those working in housing policy in a number of statutory and charitable agencies.

Some TDs voiced their concerns about the Housing Bill 2014, currently before the Dáil, which makes provision to transfer households currently in receipt of rent supplement onto a new housing assistance payment (HAP).

Richard Boyd Barrett, People Before Profit TD, called for such actions as the occupation of vacant buildings. Also in attendance was Sinn Fein TD Dessie Ellis and a number of Dublin City councillors.