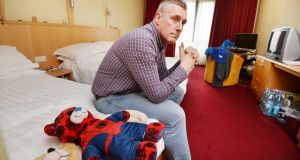 Brian Doyle in the hotel room he and his family have been living in since last October. Photograph: Alan Betson/The Irish Times.

Brian and Sandra Doyle and their children, Thomas (8) and Nathan (17) have been living in a hotel room near Dublin Airport since October.

Repayments were about €1,500 a month. When he lost his job in retail management Brian got two three-month repayment moratoriums.

In 2010, they decided to let the house, handing the €900-a-month income to the bank. They moved in with their respective parents.

“We split the family up. I had Nathan and Thomas was with Sandra.” Sandra’s mother died and the couple rented near her elderly father, for €1,000 a month. They tried to sell the Rush house, but couldn’t.

“We offered €500 to KBC and used the other €400 from the rental income, towards our rent. I was back in college, so some of the back-to-education allowance went to the rent and family also helped financially.

“My plan was to get work when I graduated, move back into the house, clear the arrears.

“We needed time though. And that was one thing KBCI wouldn’t give us.”

A receiver was appointed to the house in July 2013, locks were changed and they couldn’t get access to it. The bank took over the rental income.

“We couldn’t afford our rent now. So, we applied for rent allowance.”

However, to get rent allowance they had to be on the housing list. They applied to Dublin City Council but were told they needed a letter from KBC Ireland (KBCI) stating the mortgage was “unsustainable”.

They first asked for this in September 2013. They and a local TD, Seán Kenny (Labour Party) asked almost fortnightly over the following 10 months.

In February 2014, Brian emailed KBCI, pleading for the letter:

“Our house is in receivership and we cannot gain access. We are also prohibited from receiving rent allowance due to your refusal to provide us with a letter to the sustainability of our mortgage.

“My family will be homeless at the end of this month as we have to leave our rented house. We are pleading with you . . . Sandra’s nerves are gone and I don’t know if our family can last any longer. Please, I cannot cope with this impossible position we are in.”

In March 2014, KBCI wrote back, advising Brian he was €48,008 in arrears, that KBCI was entitled “to take possession of the property” and urging him to “co-operate with KBCI and reduce the arrears outstanding”.

This was insufficient for their social housing application.

The family lost their rented accommodation at the end of March 2014. Again they had to split the family.

Brian complained to the Financial Regulator and KBCI issued the letter on August 20th, 2014.

“By then it was too late,” says Brian. “Rents had gone crazy. We couldn’t find anywhere within the rent caps.”

When Sandra’s sister decided to sell her house last summer, the family registered as homeless.

Getting a hotel room in October was “a huge relief”, says Brian.

“The darkest days were trying to get that letter to get on the housing list. I felt powerless, that I had no recourse. You hear all this talk about the banks wanting to accommodate and help, but that was not my experience. At the end of the day, if they don’t want to help, they don’t have to.”

Brian says the house was sold by Alsops, on behalf of KBCI, earlier this year for €180,000. He graduates from UCD with a Masters in Social Policy next year.