Minister says not all bishops are balanced in equality debate 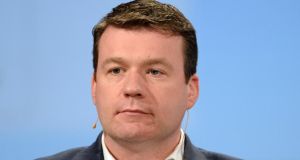 Alan Kelly, Minister fo the Environment: the public was positively disposed to passing the referendum but nothing could be taken for granted. Archive photograph: Cyril Byrne/The Irish Times

Minister for the Environment Alan Kelly has said some bishops contributing to the marriage equality debate have been balanced while others have not.

Speaking ahead of this morning’s Cabinet meeting, Mr Kelly said the public was positively disposed to passing the referendum but nothing could be taken for granted.

Asked if he welcomed the contribution of various bishops to the debate, he said:

“Anyone can debate. This is Ireland. This is a democracy. It’s up to everyone to express their opinions.

“I think some of them have been balanced, others have not.”

He said the Irish people were fair-minded.

“In the case of where you really have a referendum on the right of two people to get married if they love one another, I think that’s a fairly simple question and the Irish people are responding to that well.”

Catholic Archbishop of Dublin Diarmuid Martin recently warned against the use of insensitive language in marriage equality and family debates.

“Where the church argues from general principles, there is inevitably the feeling on the part of others that it is somehow against the concrete individual men and women who have a different viewpoint. This is made more complex if church leaders, or self-appointed church spokespersons, use language which is insensitive and over judgmental,” he said in Tralee, Co Kerry, last month.

Dr Martin made his comments after the Catholic Bishop of Elphin Kevin Doran said the question posed by the same-sex marriage referendum “is not actually about marriage equality”.

Meanwhile, Limerick-based Augustinian priest Fr Iggy O’Donovan, writing in today&#8217;s Irish Times, called for a Yes vote on the grounds of “respect for the freedom of others who differ from us”.

The referendum on the thirty-fourth Amendment of the Constitution (Marriage Equality) Bill 2015 takes place on May 22nd.

Citizens will be asked to vote on a measure to amend the Constitution with the introduction of the the following text:

“Marriage may be contracted in accordance with law by two persons without distinction as to their sex”.

Independent TD Mattie McGrath is the only Dáil figure to publicly indicate he is unlikely to vote Yes. He has also claimed that some Fine Gael and Fianna Fáil Oireachtas members are opposed to the referendum.

The Cabinet is expected to discuss the Irish language wording of the referendum when it meets this morning ahead of a debate on the matter in the Dáil during Leaders Questions at 3.15pm today.