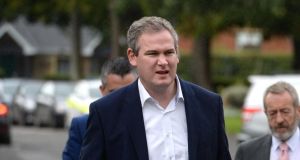 Minister of State Seán Kyne was booed and heckled at a public meeting in Oughterard over a direct provision centre.

A Government Minister was booed and heckled as up to 700 people attended a public meeting in Oughterard, Co Galway, on Wednesday, and vowed to fight any plans to provide a direct provision centre in their community.

Speaker after speaker expressed anger at the lack of consultation, information and clarity which they say has fuelled rumours in recent weeks concerning refurbishment works at the Connemara Gateway Hotel in Oughterard, which has been closed for a number of years.

Cllr Tom Welby chaired the meeting on behalf of an ad hoc Facebook group which is campaigning to stop any plans to accommodate asylum seekers in the town.

Cllr Welby said neither he or any of the public representatives attending the meeting, including Minister of State Seán Kyne and TDs Catherine Connolly and Noel Grealish, had knowledge of any plans for the future of the building.

However, Mr Kyne told the angry meeting there was a tender process ongoing in the west to find locations for new asylum seeker centres but that this was under the remit of the Department of Justice and neither he nor his colleagues were privy to information about any applications.

He was booed and heckled when he reminded those assembled that Ireland was obliged under EU and United Nations laws to accept and process anyone who could prove they had fled persecution and injustices in their own country.

Many of the speakers accused the Government of ignoring rural towns such as theirs which had only one doctor for a population of 1,600, full to capacity schools, an intercom instead of a Garda station and a social housing waiting list with no sign of any new schemes being built.

One of the main organisers of the meeting, Patrick Curran, said time and again in the course of the night that if the politicians would not stop the centre, the people would.

Businessman Rory Clancy said the town had started to rejuvenate in the past few years and that they needed support from the Government to continue that work.

He said the town was a beautiful, welcoming one that would be more than happy to take its quota of refugees in the form of a few families properly accommodated and integrated, but not housed in a direct provision centre.

Ms Connolly agreed that direct provision was wrong because it was inhumane but disagreed with some of the reasons given by people at the meeting.

She agreed it would be much better to integrate refugees among local communities but she said the Department of Justice had not learned from its previous mistakes.

“They are known for their secrecy and how they have treated people badly in the past with no accountability,” she said.

“Their lack of communication with people causes hatred and division towards people who have already fled persecution in their own country,” she said.

A ballot held before, during and after the meeting showed an overwhelming majority were against the potential centre and a show of hands earlier in the meeting was unanimously against it too.

The meeting decided to form an action group to demand clarity, openness and transparency from the department as well as strongly opposing any plan to provide such a facility in Oughterard.

There are almost 7,000 people accommodated in 39 centres in 17 counties with a handful of them described as oversubscribed.

The State owns seven of them and in 2017 paid €55million to private contractors to operate the rest of them.