McVerry supports call for referendum on right to home 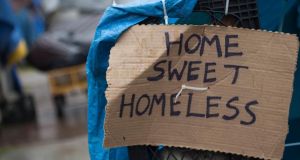 Fr Peter McVerry said that hitherto, the issue of homelessness was not a major issue for the main political parties as they didn’t see the homeless as voters. File photograph: David Ryder/Reuters

Campaigner for the homeless, Fr Peter McVerry has backed a call by founder of Focus Ireland, Sr Stanislaus Kennedy to hold a referendum on the right to have a home, saying such a move would be a major step towards solving homelessness.

“I absolutely support Sr Stan’s call for a referendum on the right to a home – if we got that into our Constitution and legislation, the government would have to act on it though I don’t think they will ever risk putting it in the constitution,” said Fr McVerry.

Speaking at Spirit of Mother Jones Festival in Cork, Fr McVerry said that hitherto, the issue of homelessness was not a major issue for the main political parties as they didn’t see the homeless as voters but he believed that view may be about to change.

Fr McVerry explained that most people’s perception of homelessness is of people with a drug or alcohol addiction or a mental health problem or some combination of both as it these people that they see in city centres.

“[But] most homeless people do not have an addiction or a mental problem, They are the invisible homeless,” he said, adding that many people end up homeless because of a relationship breakdown.

This new group of homeless is continuing to grow particularly as many are dependent on the Department of Social Protection’s rent supplement which has not matched the increase in rents being sought in the private rented sector over the last few years, he said.

The rent supplement was cut by 28 per cent during the recession but had not been increased even though Dublin rents are now only 9 per cent lower than they were at the height of the boom in 2007, he said.

“The way the crisis is developing with people not being able to afford the rents being sought in the private rental market, I think we are very possibly going to see whole families ending up on the streets and the only place I’ve seen that before is in India.

“That would put a huge pressure on the Government – we have six to seven months to go to a general election but the number of homeless people and families is going to rise and I think we could have an explosion before the election which could seriously damage the Coalition.”

Fr McVerry said the only way that the government can address the problem of people and families being evicted from the private rented sector is by either putting a cap on rent increases or by increasing the rent supplement.

Rent control has worked quite well in some other European countries and, with only 1 per cent of landlords in Dublin willing to accept people on social welfare, there was a need for legislation to ban landlords discriminating against tenants relying on rent supplement.

It was quite clear homelessness will not be a priority for the Government until it causes the sort of political embarrassment it was facing over Irish Water when it managed to find €120 million to allocate in water conservation grants to try and defuse the controversy, he added.