Many Travellers are ‘at risk’ due to fire safety issues

Campaigners warn of dangers after Carrickmines blaze which killed 10 people 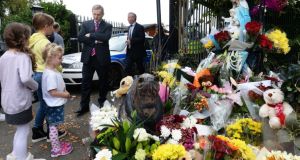 Taoiseach Enda Kenny at the scene of a fire at a halting site in Carrickmines, Co Dublin. Photograph: Eric Luke/The Irish Times

Traveller families in dozens of halting sites across the State face fire-safety risks due to overcrowding and poor maintenance, campaigners have warned.

The warning came as investigations continued into the cause of the Carrickmines halting site blaze which claimed the lives of 10 people, including five children, in the early hours of Saturday morning.

Two boys, aged 14 and six, remain in hospital. One is in a stable condition, while the other was described as serious but stable.

Garda forensics officers yesterday combed through the charred wreckage of a prefabricated cabin which bore the brunt of the damage. A child’s tricycle and chair lay abandoned on the tarmac.

Taoiseach Enda Kenny, who visited the scene near Kilternan in south Dublin yesterday, has requested the flags at Government Buildings fly at half mast on the days of the funerals.

Mr Kenny said it was an “unspeakable tragedy” and the State wanted to offer its sincerest sympathies.

Thomas and Sylvia Connors, both in their 20s, died in the fire alongside three of their children, including a six-month-old baby. It is their two sons,who are in hospital.

Ms Gilbert was pregnant with their third child.

The 10th victim was named as Jimmy Lynch, aged in his late 30s. He was a brother of Willie and Sylvia.

A total of 29 people were sleeping in cabins and caravans at the halting site at Glenamuck Road, just south of the M50 motorway, on Friday night.

Support groups and local authorities were yesterday providing housing and assistance to grieving family members left homeless by the blaze.

Margaret O’Leary, who works for Southside Traveller Action Group, said: “They were just beautiful, lovely families. The site up there, they had it spotless, really nice, flowers and everything.

Pavee Point, however, warned that funding cuts for Traveller accommodation were placing other lives at risk

Official figures show money allocated for Traveller-specific accommodation has fallen by 90 per cent – from €35 million to just over €4 million – over the past five years.

Internal Department of Environment records also show concern that management and maintenance problems are a “serious concern for a number of local authorities”.

Martin Collins, of Pavee Point, said the housing crisis meant a growing number of Traveller families were losing their private rented accommodation and ending up in overcrowded halting sites.

“I could show you six or seven halting sites in north Co Dublin alone where there are serious overcrowding issues, along with poor maintenance and management,” he said.

“There are two, sometimes three, families in a single bay. I’ve no doubt there are major fire hazards.”

The site at Glenmaluck Road had three bays, but up to six families had been living there for seven years, in three portacabins and two caravans.

One of the three cabins was added earlier this year by Dún Laoghaire-Rathdown council at the request of one of the families who wanted to accommodate extended family.