Opinion: Ireland is renowned for aid. But our laws assist multinationals in tax avoidance 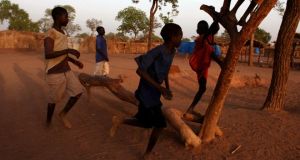 Refugees from South Kordofan playing at the Yida refugee camp in South Sudan last week. “In times of shrinking aid budgets, tax is the most important source of income for developing countries, and it is the most obvious way to move beyond reliance on aid.” Photograph: Andreea Campeanu/Reuters

The Irish Aid policy paper to be launched today will be an important modernisation of Ireland’s vision for overseas development. The Government deserves praise for putting the fight against hunger and global poverty at the heart of foreign policy.

The question is, however, will the paper address the contradiction between the incentives on offer to attract foreign direct investment to Ireland, and the impact they may have on the tax take of developing countries?

However, it is common practice for multinationals to minimise their tax bill in developing countries by legally shifting profits to subsidiaries based in jurisdictions with more attractive tax regimes – depriving poorer countries of crucial revenue.


Policy of deprivation
Our aid policy cannot be looked at in isolation. The Government committed to rebuilding Ireland on principles of fairness and equality. This should not apply in Ireland only. The policy choices we make in Ireland affect individuals and communities both domestically and globally. The same characteristics that crippled the Irish economy – light-touch regulation, a lack of financial transparency, tax arrangements in favour of the wealthy – are those that allow some companies to shift millions out of the developing world.

Recent focus across Europe on the tax-avoidance practices of multinationals has shown Ireland is not beyond criticism.

Earlier this year, a report by Action Aid identified Ireland as an integral component in the tax-avoidance schemes of food giant Associated British Foods (ABF). The schemes that involve Ireland have resulted in Zambia losing $9.1 million in tax revenues since 2007, through transactions via a “conduit company” in Ireland; claims ABF rejects. Ireland’s tax treaty with Zambia enabled ABF subsidiary Illovo Sugar, with an address in the IFSC but no record of employees or activities in Ireland, to avoid paying withholding tax on loan payments from Zambia into Ireland, and likewise on management and purchasing fees booked in Ireland.

The Department of Finance has justifiably responded to questions on the impact of Irish tax policy on developing countries by noting Ireland conforms to the highest international tax standards, as laid out by the OECD.


Shell companies
But, significantly, OECD secretary general Angel Gurría acknowledged that the international tax system had not kept pace with the current business environment, and was enabling multinationals to reduce tax liabilities by using subsidiaries and shell companies to take advantage of tax breaks.

Irish Aid enjoys a proud international reputation. Commendably, Ireland remains a significant donor in spite of pressure on domestic budgets. But our position as a low-tax jurisdiction leaves us vulnerable to being exploited by companies shifting profits away from developing countries. There is clear reputational risk to Ireland as a donor.

The degree of sophistication with which multinational companies can manoeuvre through the international financial architecture represents a major challenge to all governments, in particular those of developing countries.

The challenge for the Irish Government is to ensure that, in legitimately maintaining the range of incentives available to foreign companies, it is doing all it can to ensure that this is not at the expense of the world’s poor.


Sorley McCaughey is head of advocacy and policy at Christian Aid