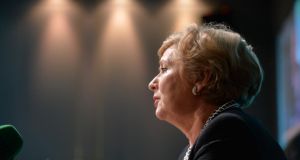 The publication of the long-awaited Children First Bill was broadly welcomed today but some campaign groups and opposition members voiced concern over the legislation’s lack of sanctions.

The Bill places a statutory obligation on certain professionals and other people working with children to report child protection concerns to the Child and Family Agency (Tulsa). Medical practitioners, teachers, social workers, gardaí, members of the clergy and child protection officers, among others, will be required to report such concerns.

The legislation also obliges those intending to provide services to children to carry out a risk assessment and prepare a child safeguarding statement within three months of commencing the service.

Minister for Children Frances Fitzgerald said the new law aims to make best safeguarding practice the “cultural norm” for anyone working with children. “Our focus on who is mandated [to report safety concerns] in the Bill is in accordance with international practice. I believe it strikes the correct balance in achieving high quality reporting, with high substantiation rates while avoiding overwhelming the child protection system with inappropriate reports, which is a key criticism of the operation of mandatory reporting in other countries,” she said.

However Fianna Fáil said a lack of sanctions for those who fail to report cases amounted to a watering down of the legislation. The heads of the Bill published two years ago included penalties of up to five years in prison for failure to comply with the law but these were absent from the legislation yesterday.

“We now appear to have ended up with a watered down version of the Bill,” said the party’s spokesman on children Robert Troy. “While professionals working with children will now be legally obliged to report concerns, it seems there will be no penalties if they don’t”.

That view was echoed by Senator Jillian Van Turnhout and the Children’s Rights Alliance. Ms Van Turnhout also said the Bill didn’t seem to provide the necessary “enforcement powers” to ensure organisations can take action over members or employees who fail to comply with the legislation. “I feel we are still falling through the net,” she said.

Children’s Rights Alliance chief executive Tanya Ward, meanwhile, expressed concern over the quality of the proposed child safeguarding statements. She said the system could be strengthened if it was carried out in conjunction with formal inspections from the Child and Family Agency.

The Children First Guidelines were first published in 1999. The legislation published today was recommended in the 2009 Ryan Report Implementation Plan. The Bill forms part of a suite of child protection legislation which already includes the Criminal Justice (Withholding of Information on Offences against Children and Vulnerable Persons) Act and the National Vetting Bureau (Children and Vulnerable Persons) Act.