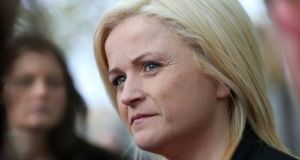 Leona O’Callaghan will say that her abuse “broke me in ways I will never heal from”.

Limerick woman Leona O’Callaghan, whose rapist was jailed for attacks on her when she was 13-years-old, has called for changes to sentencing practice to bring an end to concurrent sentences.

Patrick O’Dea (52), also known as ‘Whacker’, of Pike Avenue, Limerick, pleaded guilty on the second day of his trial at the Central Criminal Court to charges of sexual assault and rape on dates in 1994 and 1995.

He was sentenced to 18 and a half years with the final 18 months suspended. The sentence is running concurrently with a 15-year sentence O’Dea is already serving for multiple rapes and sexual assaults.

Ms O’Callaghan waived her right to anonymity so O’Dea could be named. On Thursday she will launch a new support group for survivors of domestic, sexual or physical violence.

Based on the 12-step approach of other support groups, Survivor Support Anonymous will offer a safe space for people to talk about their recovery and help them explore healthy coping mechanisms and strategies.

Ms O’Callaghan has been acting as a facilitator for the small group recently established in Limerick and she is hoping in time and with funding that other branches will begin in other counties.

The group has “boundaries” with regard to the information people will discuss in a group setting and they will not share specific details of their abuse.

“The reason for that is not to trigger each other,” Ms O’Callaghan said.

“They are encouraged to only do that in a one-to-one environment with a counsellor.”

Survivor Support Anonymous will be launched at the Health Hub in Rutland Street, Limerick at 1pm on Thursday alongside an exhibition of 21 outfits similar to those that survivors of rape were wearing when they were attacked. The exhibition, titled ‘Clothes Don’t Rape’, includes outfits such as a child’s Communion suit and jogging pants worn by a woman who was raped.

Ms O’Callaghan will speak at 6pm and the other speakers include rape survivors, and Solidarity TD Ruth Coppinger.

In her speech, Ms O’Callaghan will say that her abuse “broke me in ways I will never heal from”.

“I’m so lucky to have come out the other side, we need to take rape and abuse much more seriously to prevent that level of pain on our children.”

She will ask that the idea of concurrent sentencing for “repeat sex offenders” be addressed.

“I believe there is nothing more dangerous than teaching a rapist who may be awaiting trial that any subsequent offence he commits is likely to be concurrent,” she will say.

“It’s ludicrous, it’s unsafe and it’s petrifying as these abusers are then equipped with a feeling of nothing to lose.”

Ms O’Callaghan, through the Dublin Rape Crisis Centre, has made a submission to the O’Malley review on the handling of rape trials, which is due to report later this year.

Minister for Justice Charlie Flanagan published the terms of reference for the working group last September and it is being chaired by barrister Tom O’Malley.

Ms O’Callaghan’s submission says the length of time the process takes is likely to deter people from seeing a prosecution through. She also criticises the “insensitivity” of gardai and failure to keep in contact.

She also suggests there be a limit and restrictions on what information may be used by the defence, including on the use of details about a victim’s clothing.