Homeless family drive 160km to and from school every day 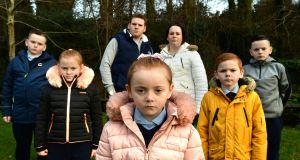 William and Patricia Maguire with their children (from left) Patrick, Mary, Margaret, Michael and William: they travel from Ashford, Co Wicklow, to Rush every day for school. Photograph: Dara Mac Dónaill / The Irish Times

A homeless family from north county Dublin, who have been driving their children 160km a day to and from school as their emergency accommodation is in Wicklow, are now “sick, tired and drained” after what they say are 18 months of the “broken promises” from Fingal County Council.

Patricia (32) and William (34) Maguire and their five children - aged between six and 12 - were living in a rented house in Rush in December 2016 when their landlord, whom they describe as “very decent”, gave them notice to quit. He needed the house for his daughter who had returned from England with her young family and who was then staying with him.

The Maguires, who are Travellers, have been on the council’s housing list for 10 years. They looked for a house to rent initially around Rush, Lusk and Skerries. “In the end we were looking anywhere in Meath, even Cavan and didn’t get so much as a viewing,” says Patricia.

On their first night as homeless, the council gave them a list of hotels and B&Bs to call, advising them, they say, that if they couldn’t find anywhere they would be provided with sleeping bags to stay in their car. They stayed in a hotel near Drogheda and the following night in a B&B on Dublin’s Gardiner Street.

“That’s when we went to Focus Ireland. They were very good, and we got a longer term booking in a hotel in Ashford [Co Wicklow].”

They took this not knowing how long they would be homeless, keeping their children at school in Rush, 80km away, hoping it would be only a few months.

“After about eight weeks we got a meeting with the council in the Swords office,” says William. “They explained to us we would be homeless for six to 12 months. We said we would be happy to be housed anywhere around Skerries, Lusk, Balbriggan – anywhere nearer the kids’ school.”

At six months homeless they had a second meeting with the same housing official, who told them, they say, they would be housed in an estate nearing completion in Lusk.

“ So we thought things were really moving. We were over the moon,” says Patricia.

Throughout they have been bringing the children to school in Rush – leaving before 7.30am, driving up the N11, circling the M50, continuing up the M1 before arriving in Rush “over an hour later”. The parents spend the day around Rush and Lusk. They had to take the children out of their weekend activities like football to give them a break from the long commute.

“The kids are getting more and more frustrated. They are seeing their friends on social media at weekends and miss them.” In addition the family is spending about €150 a week on petrol and tolls, and have almost exhausted savings.

A third meeting with the council, in July 2018 when they were a year homeless, was attended also by Bernard Joyce, director of the Irish Traveller Movement.

“They said they were in a position to offer us a four-bedroom house, in the location we wanted, before the end of the year,” they say.

They say they called the council repeatedly from October for updates.

“We’re just sick of what they are doing to our family,” says William. “It’s a lot of stress. They just won’t give us a straight answer. It’s pulling us all apart.”

After their second Christmas homeless came and went they approached Mercy Law, a not-for-profit legal firm specialising in housing rights, which is now acting for them.

David Joyce, a solicitor with Mercy Law, said: “In 10 years this family has not had one offer of a house. They will take a house anywhere in north county Dublin. Something we are seeing more and more is a structural discrimination in the system against larger families. They are not being catered for.”

A spokeswoman for Fingal County Council said it was unfortunate “a small number of families in the county are currently residing in emergency accommodation pending receipt of a sustainable accommodation outcome.

“On occasion, families limit their housing options to specific types of accommodation in specific areas and this can delay the delivery of an accommodation outcome for them.”