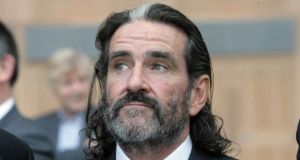 Property developer Johnny Ronan who said he did not intend to cause offence with his use of the Nazi phrase ‘Arbeit Macht Frei’. Photograph: Collins

Property developer Johnny Ronan has apologised for including a reference to second World War concentration camps in his written statement to the Oireachtas Banking Inquiry.

In a statement released early on Sunday Mr Ronan said: “I apologise for any offence which has been caused by quoting the phrase ‘Arbeit Macht Frei’ (work will set you free) at the end of my submission to the Oireachtas Banking Inquiry. It was genuinely unintended.”

According to Mr Ronan, he “believed (perhaps mistakenly)” the reason for the use of the phrase was evident from the context of his submission.

“Nama promised its borrowers that they would be treated fairly if they co-operated, but that unfortunately was not the case; co-operating businesses, including Battersea Power Station, Treasury Holdings and our China business (Forterra Trust) were destroyed, with all the consequences of that for Irish jobs and the taxpayer.”

The developer said in his view “Nama operated outside the law with no regard for people’s legal or constitutional rights. The significance of this and continuing anger I feel over what occurred is not however comparable with the horrors perpetrated by the Nazi regime.”

“I recognise that I used an inappropriate analogy in my submission and have written to the Oireachtas Banking Inquiry to request the offending phrase be removed.”

‘Arbeit macht frei’ was written over the entrance to Nazi concentration camps in Auschwitz, Sachsenhausen and Dachau, amongst others, where millions of Jews were murdered during the second World War.

Mr Ronan had faced widespread criticism over his use of the phrase.

Former minister for justice Alan Shatter, who wrote to the committee about “offensive and despicable” phrase from the Nazi period in Mr Ronan’s submission, welcomed Mr Ronan’s decision to request that the comment be removed.

“I also welcome his apology and his recognition that his difficulties with Nama ‘are not comparable with the horrors perpetrated by the Nazi regime’,” he said in a statement.

“I appreciate the enormous support I have received in recent days from people both at home and abroad for my comments on this important issue. I hope the statement now circulated by Mr Ronan will alleviate the hurt felt by those with family members who perished in the Holocaust.”

Last week the banking inquiry indicated that it had no powers to compel the developer to remove the reference from his written statement to the inquiry, which was published on the Oireachtas website.

In a statement, the committee said it examined all statements to ensure they complied with legal constraints under the Acts setting up such inquiries.

This meant the reference could only be removed if Mr Ronan, or his legal representatives, requested that it be changed.