It’s time we had some plain speaking on abortion Bill

Opinion: Proposed legislation is the product of political expediency and everybody knows it 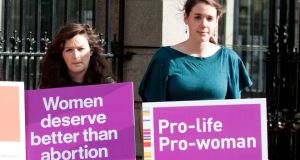 Anti-abortion campaigners in a recent protest outside the Dáil. Photograph: Collins Photos

The Government is proposing, for the first time since Ireland became independent, that the Oireachtas pass a law prescribing the death of innocent human beings.

It does so in the face of the evidence of psychiatrists to the Oireachtas last January, as well as the overwhelming evidence of international research. It falsely claims that it is bound to take this step by the judgment of the European Court of Human Rights, whereas in fact the judgment merely requires clarity in our law.

The Bill provides no extra clarity as to medical treatment. Instead, it sets up a procedure for decision-making and decision-makers, with no guidance beyond current medical practice as to the content of any decision to be made.

The Taoiseach claims that the Bill doesn’t change the position but he is here engaging in a tricky use of language. The Bill changes the position in practice in a profound way. It requires hospitals that respect the equality and dignity of everyone to introduce facilities for the termination by obstetricians of the lives of babies of physically healthy mothers where suicidal ideation is established in accordance with the criteria for abortion set out in the Supreme Court decision of over 20 years ago.

The Bill defines “unborn as it relates to human life” as meaning “following implantation until such time as it has completely proceeded in a living state from the body of the woman”.

Where medical treatment of mothers is concerned, doctors’ obligation to have regard to the need to preserve unborn human life as far as practicable should ensure that the lives of viable children in the latter stages of pregnancy will be preserved and nurtured.


Suicidal ideation
But what of the position in relation to the ground of suicidal ideation? The Bill contains no time limits. Here we are in an entirely different situation.

In some cases the very existence of the child may be the basis of the suicidal ideation. As long as the child lives, the problem remains. Merely to end the pregnancy and keep the child alive will not solve those cases. On the premise that abortion is a legitimate option, the goal must be to terminate the life of the child.

The expert group that recently reported to the Government argued that the Supreme Court, in speaking of terminating the pregnancy rather than the life of the child, did not authorise the termination of the life of a viable child.

The group appeared to think that this distinction applied in cases of suicidal ideation. But that interpretation is not easy to reconcile with a fair reading of paragraphs 36 to 37 of Finlay CJ’s judgment and is inconsistent with the normative basis of the Supreme Court judgment, which is that suicidal ideation is a basis for the intentional taking of the life of the unborn child. Arguments about the practicability of saving the child were not strong enough to prevail against that fundamental norm.


Late abortions
Dr Rhona O’Mahony, an active supporter of the Bill, is therefore wrong to claim that there is “no question” of the Bill’s allowing late abortions. It does not in the case of obstetric complications, in relation to which Dr O’Mahony has special expertise. But the question whether the Bill authorises late abortions (which would have to be carried out by obstetricians) for suicidal ideation is a legal matter, on which, with all respect to Dr O’Mahony, she can only rely on what she has been told.

And those proponents of the Bill who have been speaking to her have asserted, falsely, that Ireland is obliged by the European decision to implement the Supreme Court decision.

It is time for some plain speaking. Everybody knows that the Bill is the product of political expediency (and, for the Labour Party, an important and necessary step on a sure road to wide-ranging abortion).

Let us strive over the coming weeks to encourage our legislators to step back from the brink and instead ensure that there is clear legal support and extra clarity for current medical practice that recognises the humanity of mothers and their unborn children.