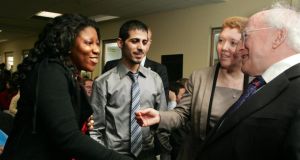 The Department of Justice has described the resignation of Irish Refugee Council from the Government working group on direct provision as “regrettable.”

Irish Refugee Council chief executive Sue Conlon resigned from the group last Thursday. In her letter of resignation, she criticised the decision to publish the Heads of the International Protection Bill without “allowing the working group to have sight or discuss the most significant changes in refugee law in Ireland for almost 20 years”.

Ms Conlon told The Irish Times the terms of reference have changed from an attempt to improve “the whole protection process” to “just looking at the direct provision system.”

Ms Conlon said she believed the Department of Justice is attempting to “control” the process of reform and resist external oversight, citing the examples of efforts by the Ombudsman and the Children’s Ombudsman to extend their role in the asylum seeker process.

She also noted Minister for Justice Frances Fitzgerald and Minister of State Aodhán Ó Ríordáin had not been involved in the process.

In response, the Department of Justice said it had “not been possible to share the draft Heads of the Bill with the working group members as they were still in development stage and hadn’t yet been submitted to the Minister or Government for approval.

“Now that the General Scheme has been published, there is an opportunity for interested parties to provide any comments to the Department on the proposal.”

The department did not respond to Ms Conlon’s comments on parliamentary oversight or the roles of the Ombudsman and Children’s Ombudsman.

The Government working group was established after increasing concerns about the treatment of asylum seekers and criticism of the direct provision system which provides accommodation for people whose applications for asylum are being processed.

According to figures collated by the Reception and Integration Agency, which manages the direct provision system on behalf of the Department of Justice, the average length of stay for residents is currently four years.

As of January 2015, there are 4,382 residents within the direct provision system.

Last year, 1,450 people applied for asylum in the State. A total of 626,065 people applied to the EU overall, according to the 2014 survey by Eurostat. Ireland and Lithuania are the only two EU countries which ban asylum seekers from working.

The chairman of the working group, Judge Bryan McMahon, said he regretted Ms Conlon’s resignation but said he was “more than satisfied that all members of the working group were genuinely engaged in the task at hand, namely identifying a set of recommendations to Government for improvements that will bring tangible benefits to existing and future applicants”.

Doras Luimní, an NGO working to support the rights of migrant in Limerick and the Mid-West region, said it supported Ms Conlon’s decision. “We have had serious concerns about the legitimacy of the Working Group since its inception, and the Irish Refugee Council’s resignation confirms our initial reservations,” said chief executive Fiona McHugh.