Almost 2,500 scheduled to come to Ireland before Christmas under new EU programme 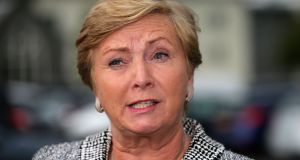 Minister for Justice Frances Fitzgerald: a spokesman from her department said said no decision had been made on where in Ireland the 2,450 refugees would be resettled. Photograph: Niall Carson/PA Wire

Irish officials are expected to travel to Italy later this month to help select the first intake of almost 2,500 people due to arrive in the State under new EU resettlement programmes.

The first groups are scheduled to come to Ireland before Christmas and will go through a fast-track asylum-determination process. Most are likely to be Syrian, Iraqi and Eritrean nationals.

Liaison officers from the Office of the Refugee Applications Commissioner, the body that decides on asylum requests, will travel to Italy in the coming weeks to help select people for relocation. They will work off lists prepared by the Italian authorities, and will have the right to refuse to relocate an applicant only where there are reasonable grounds to regard that person as a danger to national security or public order.

On arrival in Ireland, those selected for relocation will be housed at a network of emergency reception and orientation centres around the country. Their applications for refugee status will be fast-tracked .

Last month the Government agreed, as part of a coordinated EU response to the refugee crisis, to accept up to 4,000 people under resettlement and relocation programmes. That figure includes 2,450 people the State will resettle under dispersal schemes agreed by the European Council last month and 520 others who the Government had previously agreed to take in under a long-standing arrangement with the United Nations.

The work is being coordinated by a taskforce that includes representatives of all the main government departments and agencies as well as the Red Cross and the UNHCR.

Anyone accepted for resettlement will be entitled, once their refugee applications have been processed, to apply to have their families join them here.

In Northern Ireland, Deputy First Minister Martin McGuinness confirmed up to 100 Syrians selected under a resettlement scheme would arrive before December. “The scheme will begin with a fairly modest number of 50 to 100 people but more will arrive in the future on a phased basis,” he said.