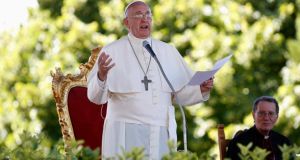 Now living in Carlow, her abuse by a priest took place in Bray for three years until she was 18.

“It’s a big thing with me that there are still members of the hierarchy there who were involved in the cover-up. I feel personally they (Church) cannot contemplate any change happening, there will be no success” as long as such people remained in place, she told The Irish Times today.

During a meeting in the Vatican, she told Pope Francis that “cover-up is still happening and you have the power to make these changes.” There were others besides Cardinal Brady, she said, but “I didn’t want to go into a litany.”

Pope Francis responded that “it was difficult to make these changes,” she said, “but it’s a big thing with me that Seán Brady is gone.”

In 1975, while investigating allegations of child sexual abuse against paedophile Fr Brendan Smyth, Cardinal Brady swore two boys to secrecy as part of a canon law investigation process. The allegations were not reported to police and Smyth continued to abuse children before being jailed in Belfast in 1994.

On August 16th next Cardinal Brady will be 75. Under current Vatican practice he must then submit his resignation as bishop to Rome, which decides on its immediate acceptance or otherwise.

Ms Kane told The Irish Times that she had met the Archbishop of Dublin Diarmuid Martin a number of times over recent years and he rang her about a month ago about meeting Pope Francis.

She arrived in Rome on Friday evening and has been staying at the Santa Marta residence where Pope Francis himself lives.

She and another abuse survivor from Dublin, two survivors from the UK and two from Germany, all staying at Santa Marta, attended 7am Mass celebrated by Pope Francis this morning, after which they had breakfast. Each abuse survivor then met the Pope separately, beginning with two from the UK.

Ms Kane was third survivor to meet Pope Francis and she was with him for about 20 minutes, She was accompanied by Marie Collins, also an abuse survivor and a member of the new Vatican Commission for the Protection of Minors which is holding its second meeting this week in Rome. It met for the first time in May.

Also present at this morning’s meeting was the Archbishop of Boston Cardinal Seán O’Malley, another member of the Commission for the Protection of Minors, who acted as translator for Pope Francis.

Apart from seeking the removal of Cardinal Brady the rest of Ms Kane’s discussion with the Pope was “more personal”, she said. She discussed the effect of her abuse and its subsequent handling by the Church on her two children, aged 18 and 14. “They have no belief in the Church in any shape or form,” she said.

It had also put a strain on her relationship with her husband Seán. They married 23 years ago and she told him very soon after they started going out together about the abuse. He had been “very supportive.” Where her parents were concerned “it (abuse) has been quite big for them,” she said.

She found Pope Francis “very, very humble. There was no standing on ceremony. No pomp.I felt very comfortable, relaxed. He seemed genuinely frustrated at what he was hearing. He listened and seemed genuine. There was a lot of empathy. There was no looking at watches. I was the one who ended it as I had said all I wanted to say.”

She had written a letter in case she might not remember all she had to say, and her daughter had written another. She handed both to Pope Francis. For her meeting the Pope this morning had been “a positive experience.”

She was to return to Ireland this evening.