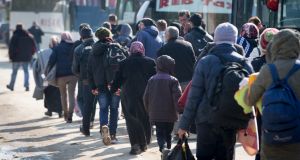 Migrants and refugees in Serbia walk towards coaches that will take them onwards to Croatia. The Immigrant Council of Ireland has criticised Ireland’s response to the crisis. Photograph: Matt Cardy/Getty Images

People’s lives are being put in danger by the failure of Ireland to introduce measures to protect the vulnerable caught up in the migrant crisis, the Immigrant Council of Ireland has said.

In a submission to the United Nations, as part of a review of human rights in Ireland which takes place next April, it called for a range of measures to be introduced in Irish immigration law to offer protection to people fleeing for their lives.

These include “protection laws” that will provide for the independence of decision-making, the best interests of children, family reunification and avoidance of domestic violence.

Also recommended is the introduction of “a stateless determination procedure in compliance with international obligations” and the enactment of “comprehensive immigration reform, including a right to family reunification in Ireland for Irish citizens and legally resident migrants.”

The council also recommends the setting up of “an independent appeals mechanisms for immigration and naturalisation decisions”.

Council chief executive Brian Killoran said the current crisis had “put a spotlight on those areas where Ireland continues to fall short, in particular when it comes to protecting the vulnerable including stateless children, victims of domestic violence as well as those split from their loved ones.

“Already the United Nations Refugee Agency estimates that 142,000 children have been born in exile as a result of the Syrian crisis – and their rights must be recognised.”

The council’s legal services manager Catherine Cosgrave said that “as a frontline agency and Independent Law Centre which responds to over 5,000 calls for assistance each year we see at first-hand how shortfalls in our immigration law are impacting on the everyday life of individuals and families.

“We encourage the Government to honour its international commitments to ensure that vulnerable people can always be assured of protection and support in our communities.”

1 What evidence is there that the IRA still controls Sinn Féin?
2 Brazilian father to be deported days after daughter’s birthday
3 Why Sinn Féin will not call the State by its name
4 Spread of coronavirus triggers European travel curbs
5 Coronavirus: Austria restarts train services with Italy
Real news has value SUBSCRIBE