Intense lobbying in Europe ahead of key vote 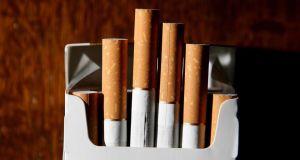 A key point of contention ahead of tomorrow’s vote is the possible reduction of the size of health warnings on cigarette packaging to 50 per cent rather than 75 per cent of the packaging. File photograph: PA

For fans of cult TV series ‘Mad Men’, the murky world of tobacco lobbying is a familiar phenomenon. Don Draper and his team of advertising executives make their way in the cut-throat world of 1960’s advertising, bolstered by the patronage of their top client, cigarette brand ‘Lucky Strike. ’

But rather than a relic of the hard-drinking, casual sexism of 1960’s office culture, the practice of tobacco lobbying is alive and well.

Tomorrow the European Parliament will vote on a key piece of European legislation which aims to regulate tobacco products amid allegations of unprecedented interference by the tobacco industry.

While EU member states are free to introduce their own rules on tobacco – Ireland, for example, was the first country to introduce the smoking ban in 2004 – the EU has been pushing to update the 10-year old EU tobacco directive which would be binding on member states. This includes new rules on the labelling and packaging of tobacco products, increased regulation on non-tobacco products such as e-cigarettes and a ban on flavoured cigarettes, including menthol-flavoured products.

Ireland, which announced its own stringent rules on cigarette packaging earlier this year, prioritised the legislation during its presidency of the EU Council, securing agreement between member states on a common position.

Under the EU system, the European Parliament must now vote on the proposals, but a scheduled vote on the directive last month was postponed until this week’s plenary session in Strasbourg. While the Parliament argued that MEP’s had not been given enough time to review the proposal after the summer break, there has been widespread suspicion that the postponement was a delaying tactic by the tobacco industry.

There have been allegations of intensive lobbying of MEP’s by representatives of the tobacco industry in Brussels over the last few months as industry attempts to water down the proposals. A report by the Observer newspaper last month claimed that Philip Morris International alone employed 161 people over the last few months to try and combat the proposals. On Friday, under the initiative of Ireland, health ministers from 16 countries issued a joint statement urging the Parliament to finalise its position. “Ministers urge MEPs to take this opportunity to significantly improve the health of millions of EU citizens by working with the Council and the European Commission for the early adoption of the Tobacco Products Directive,” they said in a joint statement on Friday afternoon.

Irish officials in Brussels, who worked intensively on the directive during Ireland’s six-month presidency, were even more exasperated. “There is an unprecedentedly intense lobbying campaign from the industry going on inside the European Parliament with the express intention of trying to frustrate this legislation,” one senior Irish official said on Friday. “This is completely on a scale way beyond lobbying that normally goes on.”

Minister for European affairs Pascal Donohue met Linda McAvan, the parliament’s lead negotiator on the directive, last week. Irish MEP’s, including Sean Kelly who has been working on the European People’s Party (EPP) position ahead of the plenary vote, have also been active in Brussels.

The key points of contention ahead of tomorrow’s vote is the possible reduction of the size of health warnings on cigarette packaging to 50 per cent rather than 75 per cent of the packaging, while some MEP’s argue that menthol cigarettes should be exempted from the ban.

With EU elections scheduled for May, legislators are under pressure to reach agreement on the directive before the end of the current parliament. There are also fears that Greece, which assumes the EU Council presidency in January, may be less keen to prioritise the issue. As MEP’s prepare to make the monthly trip to Strasbourg, they will be aware that this week, more than most, all eyes will be on them.