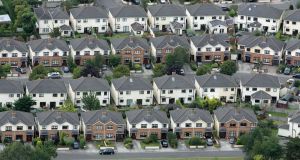 If new social housing recommendations are taken up, the move would represent the biggest social housing project in the history of the State. Photograph: Frank Miller/The Irish Times

Head of advocacy for Focus Ireland Mike Allen has said the report from the Oireachtas Committee on Housing and Homelessness, published today, will set a benchmark for Minister for Housing Simon Coveney’s report into the crisis later this summer.

Mr Allen said the report had “substantial recommendations” and added that TDs on the Oireachtas committee had been “very attentive to all submissions”.

The special Oireachtas committee will this morning publish its recommendations on how to deal with the housing and homeless crisis.

The group is expected to recommend that local authorities provide 50,000 new social housing units over the next five years. This would represent the biggest social housing project in the history of the State, if implemented by the Minister for Housing.

The report has been signed off by all members of the cross-party committee which has been meeting for the past nine weeks. It makes 23 key recommendations and more than 50 in total.

The 10,000 new units per year would be provided through construction, acquisition and refurbishment.

Anti Austerity Alliance TD Ruth Coppinger said the report does not go far enough and told RTÉ that she will be introducing her own minority report on the subject. “It is watered down, I couldn’t support it. I will bring my own report,” she said.

On Newstalk Breakfast, Fianna Fáil’s spokesperson on Housing and the Environment, Barry Cowen, said he appreciated the spirit of the report “but you can’t lodge spirit or pay bills with spirit”.

Under the report’s recommendations, refurbishment would be of currently vacant buildings including those not previously used for housing. These could include disused schools, convents, barracks and Garda stations.

On homelessness, the report calls for the restoration of the requirement, which expired in April, of Dublin local authorities that they allocate 50 per cent of available housing units to homeless households.

It also calls for this requirement to be extended to other local authorities facing acute homelessness problems.

The report further calls for the national Traveller accommodation budget to be restored to 2008 level of €40 million, from its current level of €5.5 million.

On the question of a constitutional right to housing, the committee was split, with some wanting a recommendation for an immediate referendum on the issue, while others felt it should be considered in detail by the new Oireachtas Committee on Housing and Planning. The latter view prevailed.

The report also calls for legislation to introduce rent certainty, with rent increases tied to an index such as the Consumer Price Index, to be reviewed annually.