Hoping for a place to start new life with her baby

‘I was in care for six months from when I was 17. There were a lot of things with the courts and my family’ 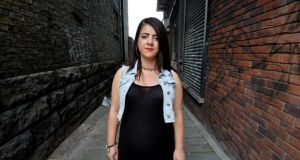 She has been in and out of emergency accommodation since, some of it meant for adults. With a baby due in 11 weeks, she is homeless.

“I was in care for six months from when I was 17. There were a lot of things with the courts and my family.”

She initially had supported lodgings but then planned to get a flat with a sister. That fell through and she stayed for a few days in a friend’s mother’s house. “But she was trying to tell me what to do, so I came into town.”

She got a place in the Regina Ceoli hostel, a shelter for women. “There was no one my age. I had my own room but it was awful there.”

She was there for two months before getting a transfer with the help of South Dublin County Council [her “home” local authority] to another emergency hostel on Amiens Street, again an adults’ facility.

She was also assigned an after-care worker with Focus Ireland, and it has been looking for housing for her since April.

Being pregnant she is entitled to €950 per month rent supplement.

She shows spreadsheets recording the efforts she has made, with the addresses of apartments, rent and landlords’ phone numbers. “I tell them I need a place. I’m about to have a baby, that I have the first month’s rent and deposit ready for them. They say they’ll call back but none has.”

Asked if she could stay with her sister or any of her other siblings, she says: “No, not after everything that has happened to us. It is sad that we have all been through so much together that now we’re not there for each other.”

She and her boyfriend are “on and off”, she says. “He lives with his mother so I wouldn’t really be relying on him.”

Amy appears confident, recounting all with a smile.

“I’ve met a lot of mad people. I’ve been out drinking with the wrong people . All I want now is a place where I can start a new life for me and my baby.”

1 Co Clare houses surrounded by water evacuated as rainfall warning issued for most counties
2 Coronavirus: Global concern grows with sharp rise in infections outside China
3 The Boris bridge: Will Johnson’s ‘vanity project’ ever happen?
4 Portraying Sinn Féin as a dangerous party is a political strategy
5 ‘The IRA has gone and they are not coming back. That’s the reality’
Real news has value SUBSCRIBE