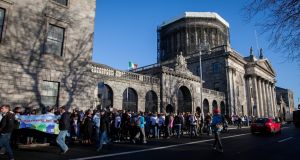 The Home Sweet Home group which has been occupying the vacant Apollo House offices in the centre of Dublin since last week has said it is considering its options after being ordered by the High Court to leave the building early next month.

The group gained entry to the building last Thursday, and has been using it to accommodate homeless people.

In a case brought by the joint receivers of the building, Mr Justice Paul Gilligan ruled the coalition of activists and homeless people involved in the occupation were trespassing. He said they must vacate the building but could stay until noon on January 11th.

He said they could stay on condition that no more than 40 people sleep there at night; that the building’s receivers be granted access to inspect and supervise the property; and that those who reconnected the electricity, if necessary, co-operated with the receivers.

He said that while the four named defendants, Glen Hansard, Brendan Ogle, Ashling Hedderman and Carrie Hennessy, were motivated by a “genuine concern for the plight of the homeless in Dublin”, receivers for the building were also “very concerned” that their actions put the homeless now staying in Apollo House at potential risk.

The Home Sweet Home group afterwards thanked the public for support and donations over the previous six days.

Joint receiver Tom O’Brien of Mazars said the receivers were committed to working with Home Sweet Home “so that an orderly vacation of the building can be achieved by January 11th”.

“We wish to emphasise that these proceedings were never about the eviction of the people currently in Apollo House, but were brought in order to address the serious legal and safety issues arising from the present situation.

“We remain very concerned for the health and safety of those occupying Apollo House, and are hopeful that Home Sweet Home will work with us to meet the directions of the court which, in turn, will allow us to work with insurers to try to put in place the necessary insurance to cover the period up to January 11th.”