Dublin City Interfaith Charter signed for all religions in the city 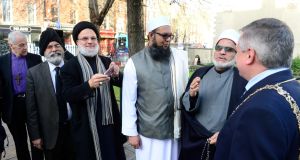 Dublin people should offer to accommodate Syrian refugees, regardless of their race or religion, as they are “our brothers and sisters”, Lord Mayor of Dublin Brendan Carr said.

Mr Carr was speaking at the Mansion House where members of the Bahà’í, Buddhist, Christian, Hindu, Muslim, Jewish and Sikh communities gathered to sign a Dublin City Interfaith Charter, which commits to living together in tolerance and peace.

Speaking as “a practising Catholic who is not going to change”, Mr Carr said he appreciated how “every single one said ‘yes’ when contacted about signing the charter”.

On the refugee crisis, the Lord Mayor added: “I ask each community here to see if it is possible to take in a family from Syria for two years and not ask their race or religion, because they are our brothers and sisters.”

He warned that “racism, xenophobia, intolerance are creeping into society” and instanced a poster featuring refugees used by Ukip in the Brexit referendum campaign as an example.

The Church of Ireland Archbishop of Dublin Michael Jackson noted how “the pressure is particularly on those of us who feel we have the ground of history under our feet as local Christians of whatever hue”.

He said all people looked “ aghast at the plight of Aleppo, a city of people – individuals and communities – who have been brutalised almost to oblivion. Their doctrine of peaceful co-existence across faiths and cultures, cultures and faiths has been tested to breaking point and to a depth of degradation which history has often retrospectively called genocide,” he said.

The archbishop had “great pleasure in commending the charter and in thanking the Lord Mayor on behalf of the faith communities and Dublin Interfaith Forum for this wonderful gift of invitation”.

Assistant Garda commissioner Jack Nolan said it was “heartening to see so many from different denominations sitting together at this time of strife”.

The gardaí represented “all the people of Ireland and will continue in every way possible to make Dublin and Ireland as safe for you as possible”, he said.

Details of charter at dublincityinterfaithforum.org