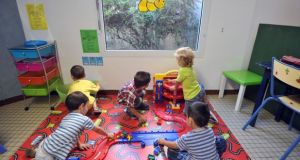 While there was no immediate concern about young children being confined to their homes, small spaces and a lack of outdoor space would be an issue, as would any prolonged absence of peer interaction. Photograph: Frank Perry/ AFP

Health and safety, and hygiene in pre-school care settings should not take precedence over the freedom children have to explore and play, a senior psychologist has said.

One suggested approach is to resume partial services with reduced numbers of children, given the critical importance of play and peer interaction among under-sixes.

Professor Nóirín Hayes of Trinity College Dublin, a psychologist specialising in early childhood education, said any policy should incorporate the developmental needs of young children and not be limited to health and safety measures relevant to Covid-19.

“They do need a sense of belonging and a sense of being part of [something],” she said. “They have to be calm and play is how they work through things and so we need to provide children with an opportunity to play.”

Professor Hayes is one of five academic signatories to a letter in Friday’s Irish Times setting out concerns in the area.

It argues there should be no “hasty opening” of crèches without protocols in place that are safe and “suited to the needs and capacities of young children”.

Professor Hayes explained that given the importance of early childhood development, striking a balance in terms of safety measures is crucial. There was no indication the Government had sought any input from child psychologists on the issue, she said.

“Everything that happens in a young child’s life is kind of crucial,” she said, referring specifically to those up to the age of six. “Relationships, nearly more than anything else, matter.”

It is important, she explained, that “health and safety, and hygiene, don’t take precedence over the freedom children have to explore and play”.

Although there is a recognition that some children are cared for exclusively at home or by childminders, the letter was written in the context of debate around the need to reopen early childhood care facilities.

Childcare providers have recently sought clarity on how they might do so. crèches are due to open for essential workers at the end of next month and for all other workers on a gradual basis beginning on July 20th. Professor Hayes said clear protocols are essential and could include some form of physical distancing markings to designate safe boundaries.

However, she and her colleagues have pointed out the difficulties in attempting to enforce social distancing among younger age groups.

“We have to recognise how critically important these experiences are for children, for their social and emotional wellbeing.”

While there was no immediate concern about young children being confined to their homes, small spaces and a lack of outdoor space would be an issue, as would any prolonged absence of peer interaction, Professor Hayes said.