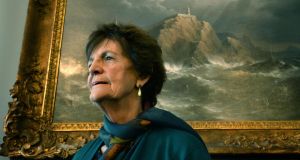 Philomena Lee says Senator Averil Power’s Bill would other women who were separated from their sons and daughters by adoption. Photograph: Brenda Fitzsimons/The Irish Times

The Government will not oppose a new adoption Bill which seeks to give adoptees a right to their birth certificates, listing their original names and their birth parents’ names. The legislation was produced by Senator Averil Power, who was adopted from a mother-and-baby home, and is co-sponsored by Senators Jillian van Turnhout, a children’s rights campaigner, and Fidelma Healy Eames, an adoptive mother.

In theory, the draft legislation would provide up to 50,000 adopted people with the right to their birth certificates for the first time. However, while the Government will not oppose the legislation, it is likely to be amended significantly before any new law is enacted.

A spokesman for Minister for Children Dr James Reilly said he had “no difficulty in principle” with the Bill. However, following legal advice, he said there may be constitutional issues in relation to the provision which allows for the sharing of information without the requirement of consent from the birth parent.

“The Minister feels the Bill would benefit from wider consultation,” he said. “The Government agrees with him that it should be referred to the Oireachtas Committee on Health and Children for further discussion,” he said”

The department was drawing up its own legislation and it might be that parts of the Senators’ bill could be incorporated into this legislation, the Minister’s spokesman added.

Legislation to enhance the rights of adopted people has been promised by the Government for the past three years. Under the terms of Senator Power’s Bill – which would apply retrospectively – every adopted person would have a right to their birth cert listing their original name and their birth parents’ names.

Ms Power said she felt her legislation was not in breach of the Constitution, given that it sought to balance the adoptee’s right to identity with a birth parent’s right to privacy. “I welcome the Government’s decision not to oppose the Bill and look forward to working with them to get it enacted into law as soon as possible,” she said. “I would very much welcome the [health and children] committee’s input as the bill goes through the Oireachtas. However, it is vital that the legislation is not delayed. “Too many people are relying on us to make this change.”Philomena Lee, whose search for her son brought worldwide attention and an Oscar-nominated film, has thrown her support behind the Bill.

“If this legislation had been in place years ago, Anthony and I would have been reunited with each other before he died,” she said earlier this week.

“Instead, he died believing I had rejected him. It is too late for us, but would be a big help to other women who were separated from their sons and daughters by adoption. I hope every Senator will do what’s right and support it.”