Natasha and Minahil are friends that live in the direct provision system in a caravan park. They speak of the difficulties facing them as teenagers, such as having friends over to visit and studying.irishtimes.com/livesinlimbo Video: Bryan O'Brien 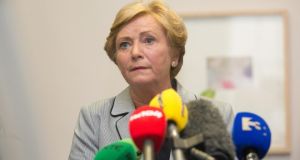 Minister for Justice Frances Fitzgerald said issues such as welfare payments for adults and children, restrictions to third-level education and supports for children will be among the issues to be examined

The Government is to establish a working group next month to review the State’s controversial direct provision system for asylum seekers.

Minister for Justice Frances Fitzgerald said issues such as welfare payments for adults and children, restrictions to third-level education and supports for children will be among the issues to be examined.

However, she ruled out extending the right to work for asylum seekers who have been in the system for long periods, due to the high level of unemployment in the State. She also pledged a new system to streamline the processing of asylum applications will be in place midway through next year.

“We’re very conscious of the individual people who are in these circumstances and if there are initiatives that can be taken on humanitarian grounds, they will be taken,” she told The Irish Times.

More than 4,000 asylum seekers – including 1,600 children – live in reception centres across the State. The average length of stay is almost four years, though hundreds have spent seven or more years in these settings.

Ireland has faced criticism by human rights groups for the duration applicants spend in the system, along with restrictions on work and welfare.

The country is one of two EU member states that prohibit asylum seekers from working. Welfare payments – €19.10 for adults and €9.60 for children – have not changed in 14 years.

Ms Fitzgerald said terms of reference for the working group have yet to be formalised, though it will include Minister of State Aodhán Ó Riordáin, an international expert in asylum, and input from non- governmental organisations.

The UN’s refugee agency, the UNHCR, last night said the decision to establish a working group was a positive development and it stood ready to contribute towards it.

This ends up stretching the process out over many years.

Successive governments have pledged, but failed, to enact an immigration, residence and protection Bill, that would provide for a single procedure where all applications could be lodged together.

Ms Fitzgerald said aspects of this Bill that relate to reforming the application process will be separated and fast-tracked into law.