Officials review programme aimed at regularising the status of up to 20,000 residents 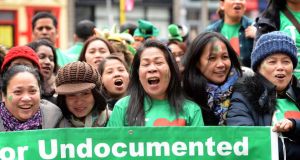 Department of Justice officials are considering a proposal aimed at regularising the status of up to 20,000 undocumented migrants living and working in the Republic.

The proposal, drawn up by the Migrant Rights Centre of Ireland (MRCI) in consultation with Department of Justice officials, is described as a “once-off, time-bound regularisation scheme” which offers a “problem-solving solution to an unsustainable situation.”

Research indicates a large majority of the undocumented people living in the Republic entered the country legally on visas in recent years and subsequently became undocumented.

The most common nationalities among undocumented people living here include people from the Philippines, China, Mauritius, Brazil and Pakistan.

A spokesman for Minister for Justice Frances Fitzgerald said the proposal was being considered.

The Department of Justice has traditionally opposed any large-scale measures to regularise the status of migrants and has examined individuals on a case by case basis.

However, former minister for justice Alan Shatter has expressed support for regularisation measures.

The latest proposal would be eligible only to those resident here over the past four years and would exclude anyone with a serious criminal conviction.

A two-year probationary period would apply and, on exiting the scheme, the person granted residency could earn their way to citizenship.

Individuals would not have access to social security or social housing during the period, in common with existing rules on the need for housing applicants to be “habitually resident” here.

The scheme also claims to have the potential to generate almost €20 million in the form of registration fees.

It estimates a further €165 million in employer PRSI contributions could be raised by those able to move out of the shadow economy.

Helen Lowry of the MRCI said undocumented men, women and children in Ireland had the same struggles, hopes and dreams as undocumented Irish in the United States.

“Many are here long-term, working, paying taxes and rearing families. The improving economy and the significant length of time undocumented migrants have lived here make this an opportune time for a comprehensive solution.”

The MRCI’s research indicates that undocumented migrants encounter significant problems in accessing basic and essential services, such as health and education. They also remain unable to leave the country to visit extended families.

The centre says it is particularly concerned about the vulnerable situation of the estimated 5,000 children of undocumented migrants, many of whom have gone to school here yet face an uncertain future.

In all, the centre estimates there are between 20,000 and 26,000 undocumented migrants living here at present.

Most are working, according to research, while more than a half of adults have third-level education.

A large majority (81 per cent) have been in Ireland for five years or more.

Department officials have previously said the Republic is a country which welcomes non-nationals, with more than 80,000 people naturalised over the past four years.

But they have pointed out that the State is entitled to expect that people coming to the Republic will obey our immigration laws, and that most people become undocumented through their own conscious actions or omissions.