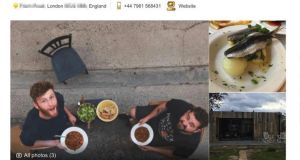 A screengrab of the TripAdvisor page for The Shed at Dulwich

A garden shed became the top-rated restaurant on TripAdvisor after a writer tricked the popular review site by submitting fake reviews.

Oobah Butler, who writes for Vice, created the fake restaurant in his garden by setting up a website with photographs of food, which were in fact made from shaving foam, bleach and extra texture provided by using his bare foot as a backdrop.

He based his meals on moods in a bid to set it apart from other restaurants.

Mr Butler, who said he had previously written fake reviews for TripAdvisor for #10 each, posted on his own website: “An appointment-only restaurant located in south London, The Shed has been operating privately for years.

“In 2017, it decided to open its doors. As of November that year, it was TripAdvisor’s top-rated restaurant in London.”

He bought a mobile phone and registered the number as the restaurant’s while refusing to give an address as it was “appointment-only”, enlisting the help of friends to meet people nearby and guide them to the premises.

Trip Advisor's no 1 restaurant in London that wasn't. Welcome to the Shed, Dulwich (or as I described it when they first got in touch, the second best shed based eating experience, after my own, natch.) A brilliantly executed piece of work. https://t.co/AfLF7cs5EK

The restaurant slowly climbed the rankings on the back of reviews from friends.

Guardian restaurant critic Jay Rayner even tweeted: “At last: a restaurant that recognises food is all about mood.

“Of all the shed-based eating experiences out there this one sounds like the best.

“Or at least second best. (I have my own shed, hence). Personally I’m keen to try ‘contemplation’.”

Mr Butler writes in his article: “I realise what it is: the appointments, lack of address and general exclusivity of this place is so alluring that people can’t see sense. They’re looking at photos of the sole of my foot, drooling. Over the coming months, The Shed’s phone rings incessantly.”

After his restaurant made it to number one, he held a special event for guests at which he served, for free, heated ready meals from a discount supermarket.

On leaving, one couple asked if their attendance would allow them preferential bookings in future.

Mr Butler concluded: “So there we go: I invited people into a hastily-assembled collection of chairs outside my shed, and they left thinking it really could be the best restaurant in London, just on the basis of a TripAdvisor rating.”

TripAdvisor said in a statement: “Generally, the only people who create fake restaurant listings are journalists in misguided attempts to test us.

“As there is no incentive for anyone in the real world to create a fake restaurant it is not a problem we experience with our regular community, therefore this ‘test’ is not a real world example.” – PA