Gay-themed traffic lights get Vienna into mood for song 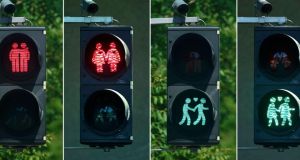 Over the past few days, gay-themed traffic lights have been installed across Vienna. The traffic lights are intended to get the city in the mood for the annual Eurovision Song Contest. Photograph: Heinz-Peter Bader/Reuters

Gay-themed traffic lights are, apparently, getting Vienna into the mood for the annual Eurovision Song Contest, one of the world’s most popular kitsch cultural events which this year is being hosted by the Austrian capital.

Dozens of traffic lights in central Vienna have been programmed to show male or female gay couples with hearts – in red for stop and green for go – replacing the usual single, gender-neutral figure.

The campaign is intended to present Vienna as an open-minded city and also to improve traffic safety as the unusual symbols attract the attention of drivers and pedestrians, a spokeswoman for Vienna’s city lighting department said.

The city of Vienna will then collate data to see whether the campaign has indeed helped traffic safety, she added.

The Eurovision Song Contest, now in its 60th year, has long been a fixture on the international gay calendar.

Last year, bearded transvestite Conchita Wurst won the contest for Austria with the song, Rise like a Phoenix.

About 40 countries are taking part in the 2015 Eurovision contest and the final will be held on May 23rd.

Teenager Molly Sterling is hoping to represent Ireland at the final, but first the 17-year-old Tipperary pianist has to make it out of the semi-finals.

The first semi-final will take place on Tuesdaym May 19th, followed by the second semi-final – which includes Ireland’s entry, Playing with numbers – two days later. Twenty qualifiers from the semi-finals will go on to sing in the final.

Vienna will also host a “Life Ball” charity event on May 16th to raise money for the fight against HIV and AIDS. Hollywood actress Charlize Theron and French fashion designer Jean Paul Gaultier will be among the guests, along with Conchita.