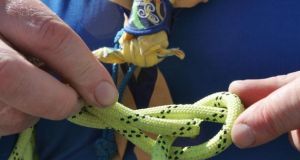 The man, who is now in his 70s, was arrested on Saturday morning by investigating gardaí. He was released without charge on Sunday. Photograph: Brenda Fitzsimons

A former scout leader has been arrested in relation to alleged child sexual abuse in the 1970s and 1980s, with a file to be sent to the Director of Public Prosecutions (DPP).

The man, who is now in his 70s, was arrested on Saturday morning by investigating gardaí. He was released without charge on Sunday, with a file to be prepared for the DPP, who will decide on whether to pursue a criminal case.

A Garda spokeswoman said the arrest “arises as a result of allegations of indecent assault in the 1970s and 1980s” and investigations are ongoing.

The Garda investigation into the alleged historical abuse by the man has been ongoing for nearly a year and a half, and it is understood there are multiple alleged victims in the case.

An Garda Síochána previously confirmed it was carrying out 110 criminal investigations into former scout leaders alleged to have sexually abused children in legacy scouting organisations.

A team of specialist investigators from the sexual crime unit was set up to co-ordinate the criminal inquiries within the Garda National Protective Services Bureau.

The abuse relates to predecessor bodies, the Catholic Boy Scouts of Ireland and the Scouts Association of Ireland, which merged in 2004.

The historical abuse scandal was first disclosed by Scouting Ireland in late 2018, after large numbers of survivors began to come forward.