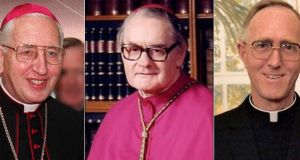 Three former Archbishops of Dublin have been criticised in trenchant terms in a previously unpublished section of a report on the handling of child abuse cases in Dublin.

Archbishops Dermot Ryan, Kevin McNamara and Cardinal Desmond Connell are named in Chapter 20 of the Murphy report, published this afternoon.

Chapter 20, which dealt with former priest Patrick McCabe (77), was released for publication by the High Court yesterday and placed in its entirety on the Department of Justice website this afternoon. McCabe walked free from court last March after an 18-month jail term was backdated by the judge.

The chapter found “shocking”, Garda “connivance” having the affect of “stifling one complaint and failing to investigate another, and in allowing (then) Fr McCabe to leave the country”

McCabe was arrested in the US in August 2010 and extradited to Ireland in June 2011. Last October he was jailed for 18 months after he pleaded guilty to the indecent assault of five schoolboys.

At 62 pages Chapter 20 is the longest chapter in the Murphy report, which was published in November 2009.

The Chapter’s findings are among the most critical of church and Garda authorities made by the Murphy Commission, which investigated the handling of clerical child sex abuse allegations by church and state authorities in Dublin’s Catholic archdiocese between 1975 and 2004.

In Chapter 20 the Murphy Commission said it was aware of 21 complainants where McCabe was concerned.

The Murphy report found that: “Archbishop (Dermot) Ryan not only about knew about the complaints against Fr McCabe, he had a considerable understanding of the effects of abuse on children. This is one of the few cases in which he took a close personal interest.”

Murphy found that Archbishop Ryan “protected Fr McCabe to an extraordinary extent; he ensured, as far as he could, that very few people knew about his activities; it seems that the welfare of children simply did not play any part in his decisions.”

During the tenure of Archbishop Kevin McNamara, from 1984 to 1987, it found that in May 1986 Fr McCabe returned to Ireland from the US under a cloud following “stories of unappropriate conduct” at a Californian parish.

Murphy said that: “To the knowledge of the archdiocese, Fr McCabe stayed on in Dublin for the summer of 1986. His activities appear to have been entirely unmonitored, despite the archdiocese’s knowledge that he had been declared a paedophile and despite its knowledge of many complaints against him. He moved from house to house and he had the use of a car.”

While in Dublin then he abused a nine year old altar boy.

McCabe returned to the US briefly but was back in Dublin by 1987 unknown to Church authorities. He got a job in a school. When the archdiocese heard of this the school was informed about McCabe’s history and he was removed.

In January 1988 a meeting of Dublin’s Auxiliary Bishops, attended by Archbishop-elect Desmond Connell, was told that he had assaulted a 14-year-old boy at a school Mass.

Rome was contacted and asked that Fr McCabe “be reduced to the lay state as quickly as possible “otherwise immense scandal and damage will ensue both for the Church and the priesthood in this Diocese.”

McCabe was sent to St Patrick’s psychiatric hospital in Dublin. While there he told diocesan authorities he had secured a job with homeless people at Stockton, California. They established it involved adults only.

McCabe left hospital in February 1988. Then, and in one of its most damning conclusions, the Murphy report concluded: “The bishops decided to let him go to the USA. They, in effect, set him loose on the unsuspecting population of Stockton, California. There is no record that they notified the bishop of Stockton of his arrival.”

In May 1988 the diocese of Sacramento became aware of McCabe’s presence in California and, as the Murphy report put it, “assumed, wrongly of course, that the Dublin Archdiocese might not have been aware of his presence in Stockton.” Sacramento informed Dublin that it (Sacramento) had a duty which they intended to fulfil, to notify Stockton about McCabe, which they did.

Most of Murphy’s criticisms of the Garda concerned the handling of the 1986 allegation of abuse of a nine year old boy, reported by the boy’s parents.

When that incident took place then Fr McCabe was staying in a west Dublin house owned by Chief Superintendent Joe McGovern. McCabe was interviewed by two gardai in connection with this incident but the file went missing.

there, according to the Murphy report, he “made certain limited admissions to the chief superintendent who did not convey them to the investigating garda, but who did convey them and the fact of the Garda investigation to his local parish priest, Fr Curley.”

Explaining this to the Murphy Commission Chief Superintendent McGovern

said “he considered Fr McCabe’s behaviour to be a matter for the Church to deal with.”

The Murphy report said “the detective garda handling the investigation contacted an official in the office of the Director of Public Prosecutions (DPP) seeking advice. The investigation stopped. No further inquiries were made by the gardaí.”

It said that “even though the gardaí knew that Fr McCabe intended to return to the USA, no warrant was sought for his arrest.”

A copy of the boy’s statement given to gardaí was forwarded to Church authorities which, gardai interviewed by the Murphy Commission, agreed was “entirely improper.”

The Murphy report concluded that “the Archdiocese’s handling of events was facilitated in significant ways by the gardaí.”

It added “the Commission is of the view that this particular Garda investigation was marred by Church interference which was facilitated by the gardaí and which was material in allowing Fr McCabe to evade justice.”

It said that “between 1988 and 2003 not a single inquiry had been made by the gardaí in relation to this matter. In the Commission’s view, it is difficult not to conclude that the renewed interest in the complaint in 2003 was prompted more by a fear of public opprobrium then by any realistic prospect of successfully concluding the

The Murphy Commission’s overall assessment of Garda involvement in the McCabe case was unequivocal. It said: “The connivance by the Gardaí in effectively stifling one complaint and failing to investigate another, and in allowing Fr McCabe to leave the country is shocking. It is noteworthy that the Commission would not have been aware of the Garda activity in question were it not for the information contained in the Church files.”

In a statement this evening the Catholic Archbishop of Dublin Diarmuid Martin said: “For those abused by Patrick McCabe, the wait for truth has been a long one. They rightly also feel that their fight for justice has been a long one and as I know from my meetings with some of the survivors, justice delayed compounded their suffering. I hope that today, with the publication of the full Chapter 20 of the Murphy Report some of their suffering will ease.”

He said: “There are those who think that with the publication of the final chapter of the Murphy Report we can now draw a line under this dark period in the history of the church in Dublin. There are still those who would challenge the work of the Murphy Commission.

“I repeat that the Murphy Report represents and remains a true milestone which marks our history. What happened to children in the Church of Jesus Christ in the Archdiocese of Dublin is something that must never be forgotten. It is a part of the history of the Archdiocese and can never be whitewashed away.

“The Murphy Report is a document that must continue to guide and inform our protection policies today and into the future.

“The Archdiocese of Dublin continues to receive information about allegations and concerns about Patrick McCabe, as about other men who ministered in this diocese and who were serial abusers of children. Any new information received by the Diocesan Child Safeguarding Service is shared with the civil Authorities and the National Board for Safeguarding Children in the Catholic Church. The Archdiocese of Dublin is aware of allegations against Patrick McCabe by over 30 named persons here and in the United States. ”

His “concern today is with the victims of Patrick McCabe, those who have come forward to tell their stories and those for whom the pain of telling their story is still too raw. I think of the parents and the spouses and the children of the victims whose lives have also been damaged by what happened,” he said.

A garda spokesman said they would not be commenting on Chapter 20 until they had an opportunity to read it.