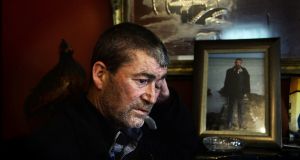 John Lynch with a framed photograph of his brother Willie who died in the Carrickmines fire. Photograph: Cyril Byrne

A Traveller family who lost 10 loved ones in a fire on a halting site in Carrickmines, Dublin, last year, is in a local authority home in Wicklow with serious fire safety risks, an official report finds.

The Lynch family in Bray are among hundreds of Traveller families across the State in unsafe, overcrowded conditions according to a series of local authority audits of fire safety of Traveller housing, released to The Irish Times under the Freedom of Information Acts.

The audits were ordered last year by the Department of Housing (then the Department of the Environment) following the Carrickmines fire on October 10th 2015 and will feed into a national report of fire safety in Traveller housing. It will be published in the autumn by the National Directorate for Fire and Emergency Management.

Among local authorities’ findings are that all Traveller housing sites in Co Kerry are at risk due to overcrowding, while in Limerick inappropriate electricity connections, inaccessible or non-existent water hydrants and “significant overcrowding” are identified across the 11 Traveller sites.

All 31 local authorities were asked for their audits under the Freedom of Information Act and 17 released them. The four Dublin authorities refused as did Cork City and Cork County Councils, the two local authorities in Galway and Donegal, Roscommon, Cavan, Carlow, Laois, Longford county councils.

The Dublin authorities used the same wording in their refusal, saying they anticipated a “significant decision” from the national audit and “any release prior to that could compromise the decision making process”.

In Wicklow concerns are raised about the safety of residents in all 10 sites, including that of the Lynch family in Bray.

John Lynch, in November last year, spoke to The Irish Times about their living conditions following the deaths of family members in Carrickmines. He said he feared for his family after Carrickmines, in which he had lost his sister Sylvia (27), her husband Thomas Connors (25), their children Jimmy (5), Christy (2) and Mary (five months), his brother Willy (25) and his fiancee Tara Gilbert (27), their daughters Jodie (9) and Kelsey (4) and his brother Jimmy (39).

In Co Wexford, inspections of all eight sites found insufficient smoke alarms, fire blankets and carbon monoxide alarms, with caravans too close together in sites in Bunclody and New Ross.

Louth County Council, in its inspection of Woodland Park in Dundalk, found more than 16 serious safety issues, including overcrowding, caravans too close together, lack of access for fire-tenders, no smoke or fire alarms, no water hydrants on site and low overhead cables. Some 23 families were evicted from the site in January. The council cited fire safety concerns.

In Co Kilkenny, three sites were inspected. Among the findings were overcrowding, inadequate access for fire tenders and defective hydrants.