Ebola: how faith, hope and science play their part 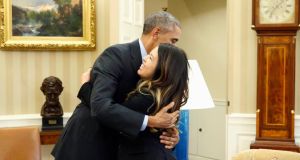 ‘Is there anyone who does not regard Nina Pham and her fellow workers as astounding human beings?’ Above, US President Barack Obama hugged Ebola survivor Nina Pham last week. Photograph: Larry Downing/Reuters

Nina Pham, the 26-year-old Texan nurse who was the first person to contract Ebola on US soil, resurfaced last Friday, virus-free, to a relieved nation and a tight Obama hug. She was part of the team that had cared for Thomas Duncan, a Liberian man who had arrived already infected, in the US. Despite the mounting national hysteria about the disease, Pham nursed him to the day before he died. Is there anyone who does not regard her and her fellow workers as astounding human beings ?

There is. This is because, at her press conference, she said a terrible thing: “I believe in the power of prayer.” The young nurse – who by then probably knew more about the terrifying reality of Ebola than 99 per cent of those on social media combined – also thanked her health care teams in two hospitals, and singled out a fellow survivor, Dr Keith Brantly, for donating plasma containing Ebola antibodies as part of her treatment.

But the keyboard warriors bestirred themselves just long enough to read the prayer headline.

“How about some credit for science, which saved your life?”

“HOW ABOUT THE POWER OF MEDICINE???”

“Yes Nina Pham I’m sure it was ‘prayer’ that ridded your body of Ebola. But, if that’s the case, then why didn’t you just stay home?”

Finally, a dissenting voice: “Why not accept that her faith at the very least helped her emotional/mental state rather than making it an issue?”

Asked during a radio interview this year, whether I had turned to faith during an illness, I said that while I struggled with faith, I was deeply touched and comforted by the many people who had sent appeals into the universe for me; they were my friends. That earned me chastisement from both sides: one suggested I was trivialising faith; the other that I was giving it credibility.

Spirituality, as this nation is learning the hard way, is not about the old simple faith of our fathers but something profoundly personal, complex and challenging. But what use is that struggle if it would deny the suffering body and spirit of Nina Pham the comfort of her kind of spirituality?

The hostility to organised religion is understandable and well-rehearsed. All those years of being chained in merciless man-made doctrine, appeasing ignorant, misogynistic clergy with their tedious, generic sermons, the abuse scandals, the cover-ups, the “mental reservations” and the continuing exclusion of women. Yet most of us have known enough decent, intelligent, self-sacrificing men and women of religion to see how they wrestle with their own doubts, fears and isolation amid the relentless, indiscriminate vilification.

Their problem is to be bound by label to the worst of their kind, so that people who profess anything of their beliefs, even a heroine such as Nina Pham, are dismissed as nothing more than their useful idiots.

Far cooler now to be a militant atheist, to parade that superior intellect and the absence of that fatal gullibility gene. During his last book-promotion blitz, the chief expounder of the rational perspective, Richard Dawkins, questioned whether filling children’s heads with stories about frog princes could be damaging to them (he decided no, on balance, but not before the publicity machine had roared into action). His views, in the main, are no more intellectually stimulating than many letters and articles in this paper in recent months but his offering is distinctive in one respect: that’s the fathomless contempt towards other people’s sincerely held beliefs which puts him right up there with old-style Redemptorist preachers.

His attitude and omnipresence have instilled the notion among his faithful following that all scientists must despise religion.

But . . . “It’s a big fat, myth that all scientists are religion-hating atheists”, writes Dr Sylvia McLain, who runs a biophysics research group at Oxford and blogs at occamstypewriter.org. Peter Higgs (of Higgs boson fame) has “very sanguinely criticised Dawkins for his anti-religious stance, and goes on to say that he doesn’t think science and religion are incompatible”. The physicist Prof Brian Cox echoes that view. Prominent, openly religious scientists, include Frances Collins, the head of the US National Institutes of Health; Gerhard Etrl, who won the Nobel Prize in Chemistry (2007) and William D Phillips, who won the Nobel Prize in Physics in 1997, says McLain.

It doesn’t mean that they, any more than Dawkins, hold the truth. It means that no side holds a monopoly on intellectual heft or imbecility and no amount of pulpit-thumping can make it so. There is one certainty: they and humanity generally would benefit from Nina Pham-scale infusions of courage and compassion – ie do unto others as you would have them do unto you.