Officials checking claims suggestion was made as solution to housing difficulties 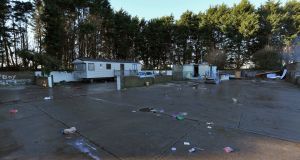 A number of Traveller families evicted from their homes at an unofficial halting site in Co Louth were told by a local authority official to consider putting their children into care as a means of securing accommodation.

Three mothers, who were among more than 70 people evicted from Woodland Park unofficial site on the outskirts of Dundalk, told The Irish Times it was put to them earlier this week that a solution to their housing situation was to have their children placed in foster families.

They say the offer was made during talks at at the council’s offices in Dundalk, on Monday.

Brigid McDonagh, a single mother of a five-year-old girl, said one official “told us the women could go to the Women’s Aid refuge in Dundalk, the men could go to a homeless hostel in Drogheda and [the official] would arrange for the children to go into care”.

She said she asked “what about my situation?” and was told “same as the others”.

Ms McDonagh said: “It would make you afraid to go near the council now. You’d be afraid all the time they’d take your child from you.”

Two other mothers, who did not want to be named – one with three young children – also said the suggestion of putting their children into care had been made to them on Monday.

Rebecca Quinn, spokeswoman for the families, said she was aware of the accounts of these meetings and called for a “full, independent investigation”.

“We have heard reports of these kinds of intimidating suggestions being put to Travellers in Co Louth since the evictions and even before. This is an ongoing issue. It has been said to Travellers that if they declare themselves homeless the children could be taken away. These threats to break up families are not acceptable.”

A spokeswoman for Louth County Council said officials were looking into the claims.

Some 23 families were evicted from Woodland Park since Friday, having been given 48 hours to quit on Wednesday, January 13th.

Louth County Council said the evictions were on health and safety grounds, following a fire-safety audit of the site on October 19th, 2015. This was conducted following the tragedy at Carrickmines in Dublin when 10 people died in a fire on an unofficial Traveller site on October 10th.

While families with very young children have been provided with B&B accommodation until Saturday, 15 families moved with their caravans to a nearby site, adjacent to Dundalk retail park.

It is unclear who owns the site, where there is no electricity, running water or toilets. Hoarding between it and the busy Inner Relief Road is broken, leaving openings through which young children could wander out.

The families say they were given a verbal notice to quit “within 24 hours” by gardaí on Wednesday evening. On Thursday night however they remained on-site. Gardaí say they are “liaising” with them.

Eleanor Kelly, solicitor for the families, said she had written to gardaí seeking the legal basis for their request that the families leave, but had not had a reply.