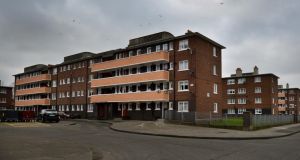 Dolphin House flat complex, Dolphin’s Barn, Dublin: flats will be amalgamated to make larger units, and the orientation of the flats, which face away from the Grand Canal, would be changed to make better use of the canal as an amenity. Photograph: David Sleator.

A €16 million regeneration of one of the largest local authority flat complexes in the State is to begin in the new year.

Dolphin House, a 1950s estate of 400 flats near the Coombe hospital in Dolphin’s Barn, has become increasingly dilapidated over the past 20 years with persistent damp, mould and sewage problems.

The complex was designated for demolition and redevelopment several years ago, and Dublin City Council had hoped to pursue the project as a Public Private Partnership, but the economic crash scuppered those plans.

The estate was recently the subject of a complaint to the Council of Europe by the International Federation for Human Rights, accusing the Government of presiding over appalling living standards and failing to meet basic and legal housing requirements.

The council is now undertaking the redevelopment of Dolphin House. However, unlike other flat complexes that have undergone regeneration, it will not be levelled and rebuilt, but will instead undergo a “deep retrofit” programme, the council’s head of housing Dick Brady said.

“The residents said they didn’t want their community busted up, and in order to do that we couldn’t go down the road of wholesale detenanting and demolition which would have seen the community dispatched to the four corners.”

The reconfiguration work will see buildings stripped back to their skeleton, the replacement of all sewage systems and drains, water and electricity services. It will also involve the removal of some internal non-structural walls and the addition of balconies and lifts.

The existing blocks stand in a U-shaped formation. New blocks would be built to enclose the complex and create internal courtyards, which would increase the security of the complex and reduce opportunities for antisocial behaviour. The orientation of the flats, which face away from the Grand Canal, would also be changed to make better use of the canal as an amenity.

To accommodate these residents during the building phase, which should take two years to complete, 38 flats in other parts of the estate which were in the worst state of repair have been refurbished to a “comfortable” level, Mr Brady said. These units have been repainted, have new insulation and air circulation to counteract damp problems, new bathrooms and kitchens and new flooring.

The cost of this work has averaged €40,000 per unit. These will later undergo the more extensive retrofitting, but will be used over the next three to four years to accommodate tenants when their flats are being retrofitted.

In October city councillors will be asked to approve the redevelopment work, and workers should be on-site in the early months of next year.

Separately the council is to build new senior citizens’ accommodation on another part of the site. The residents of the existing senior citizens’ complex, Dolphin Park, will be able to remain in their homes while the new units are being constructed.