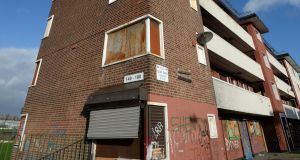 The last remaining blocks of flats at O’Devaney Gardens, off North Circular Road, Dublin, are to be demolished. Photograph: Dara Mac Dónaill

The demolition of O’Devaney Gardens, one of Dublin’s most troubled and dilapidated flat complexes, is finally to be completed almost eight years after it began.

Dublin City Council is to demolish the last four remaining blocks of flats, fully clearing the site, to make way for a new development of some 400 homes, 30 per cent of which will be used for social housing.

The 1950s flat complex, close to the Phoenix Park in Dublin 7, was to have been redeveloped under a public-private partnership (PPP) between the council and developer Bernard McNamara but after several delays the deal collapsed in 2008.

Most of the blocks were demolished in the intervening years but four remained, and until recently a handful of tenants remained living amid the largely boarded-up complex.

Last year, Minister for the Environment Alan Kelly directed the council to refurbish 64 empty flats at a cost of €4.72 million for use for homeless families.

However, the city councillors last April overruled his proposal in the hope the land would eventually be developed for housing.

Last July the council announced that O’Devaney Gardens would be included in its vacant lands initiative under which it hopes to attract housing providers to build a mix of social, affordable rental and starter homes on 30 hectares of vacant land in the city.

The site had not originally been selected by the council for the initiative but was added after a significant number of parties expressed interest in developing it.

At nearly six hectares, and close the Phoenix Park, Heuston Station and the city centre, it is seen as a prime site for housing development.

In addition to social housing and starter homes, more than a quarter of the housing could be used for a new affordable rental scheme.

The scheme aims to offer “at cost” rented housing to low-income workers.

As part of Budget 2016 the Government set aside €10 million from the proceeds of the sale of Bord Gáis Éireann for an affordable rental pilot scheme.

While the details of how the scheme will work have yet to be announced it is likely that tenants will get a discount of up to 30 per cent on their rent.

Unlike the traditional private rented sector, this model has the potential to “guarantee a home for life”, the council has said.

The council also plans to develop sites it owns at Oscar Traynor Road in Coolock and St Michael’s Estate in Inchicore as part of the vacant lands initiative.