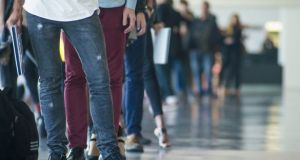 The county with the most long-term unemployed young people is Dublin, with 1,697 followed by Cork with 526. Photograph: iStock

Almost 8,000 people under the age of 26 have been unemployed for a year or more, a figure which is “still far too high”, according to the National Youth Council of Ireland.

Responding to figures provided to Independent TD Tommy Broughan, the council is calling for a halving of this figure in the coming year, saying this could be achieved with an investment of €22 million.

“While we welcome job growth in the Irish economy and the consistent trend of reduced youth unemployment, we are concerned about the 7,817 young people under 26 who are now long-term unemployed,” said James Doorley, deputy director of the council.

The county with the most long-term unemployed young people is Dublin, with 1,697 followed by Cork with 526, Limerick with 469 and Donegal with 453. The counties with the fewest are Leitrim with 71, Monaghan with 79, Sligo with 104 and Roscommon with 118.

The council, in its pre-budget submission, has costed measures it said will reduce youth unemployment.

Among the measures suggested is a €2 million investment in a national “access to apprenticeships programme”. This would support young people, from disadvantaged areas in particular, to overcome barriers that may be preventing them from accessing apprenticeships.

“For example, the entrance criteria for some apprenticeships now require qualifications to a certain level in some subjects. Where a young person has the motivation and aptitude for a trade but cannot meet these entrance criteria, an access programme can assist the young applicant to meet the entry requirements.

“Likewise, such access programmes could promote the greater participation of young women in apprenticeships, which is very low at present at just over one per cent,” said Mr Doorley.

The council also calls for the provision of an additional 2,650 education and training places through Solas, the State agency on further education, at a cost of €20 million.

“Though €22 million is the gross cost this investment would lead to reduced social welfare payments as more young people move into employment,” said Mr Doorley. “For example, if we assume there were 2,650 fewer young people on €107.70 a week – the lowest rate of jobseeker’s allowance – this would save just over €14 million per annum, so the estimated net cost would be €6 million,” concluded Mr Doorley.

Among other measures sought are equality for young jobseekers in social welfare payments and an end to youth homelessness.

“Census 2016 indicates that our population aged 10-24 years will increase to over one million by 2025, so we need to invest in policies, services and supports to meet the needs of young people today, while preparing for demographic pressures in the coming years,” said Mr Doorley.