Many firms in asylum accommodation have millions in accumulated profits 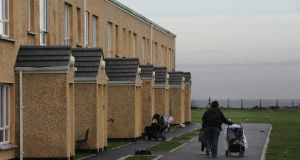 The State pays firms about €50 million a year to provide bed and board for more than 4,000 asylum seekers. Housing in Mosney for asylum seekers (pictured). Photograph: Frank Miller/The Irish Times

Private companies involved in providing accommodation for asylum seekers are highly profitable and in some cases have accumulated profits of millions of euro.

The State pays firms about €50 million a year to provide bed and board for more than 4,000 asylum seekers at 34 direct provision centres across the country.

An Irish Times analysis of company records shows the much criticised direct provision system has proved lucrative for businesses involved in the catering, hospitality and property sectors.

Fazyard Ltd, a company owned by Co Wicklow businessman Seán Lyons and which is linked to three asylum centres, had accumulated profits of €10.8 million, according to the latest company records.

Barlow Properties is one of a number of companies with common directors or shareholders connected to five asylum centres in Cork, Limerick and Waterford. It had accumulated profits of €2.5 million at the end of last year.

Many other firms show up as loss-making, but are often paying profit out of their companies to directors or to other linked companies.

In all, companies with published accounts recorded accumulated profits of about €25 million. This is likely to be a significant underestimate given that some of the biggest firms have taken elaborate steps to shield their accounts from public scrutiny.

The details have come to light as tensions continue to surface in some centres over issues such as living conditions and length of stay in institutional settings that were designed to be a short-term solution.

In other cases, firms have filed abridged accounts which do not give a figure for annual profits or show how much individual directors are paid.

The agency says all private contractors are required to provide high standards of accommodation and are inspected regularly.

“RIA constantly engages with its contractors to ensure that value for money is being achieved and that the contractor is complying with standards of accommodation, bed-usage, health and safety etc, as set out in contracts and in other legal provisions,” it said, in reply to a recent query.

The Irish Refugee Council insists it is possible to create a more humane and affordable system where profit is not a motive on the part of accommodation providers.

Sue Conlan of the council said a move towards self-catering within the existing system would give residents choice, dignity and independence.

An analysis of all public funding provided to direct provision firms to date shows that Mosney Holidays plc – which accommodates up to 800 asylum seekers at the former Butlin’s holiday resort in Co Meath – is the biggest recipient. Its last published accounts in 2009 show it recorded accumulated profits at the end of the year of €5.4 million.