Debenhams workers live with the trauma of liquidation one year on 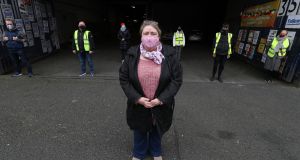 Following a year of protests, pickets, sit-ins and even arrests, the bitter Debenhams dispute appears near resolution.

Union representatives of the more than 1,000 mainly female workers are continuing talks with the State training agency Solas on a €3 million fund to support them going into training or education or starting businesses.

It is hoped the talks will bring to an end a struggle that began on April 9th last when all staff across the UK retailer’s 11 Irish outlets were told by email that their jobs were gone.

Protests led to a ballot for strike action – despite there being no jobs to protect – to try to force Debenhams and its liquidator to honour redundancy terms agreed with the Mandate union in 2016.

Michelle Gavin, Mandate’s shop steward in Waterford, had worked in the city’s branch for 27 years. She “got a pain in [her] heart” when she opened the email shortly after 11.30am on Thursday, April 9th.

It was “with great sadness”, staff were told, Debenhams Retail Ltd was “going into administration”. An application would be made to put the Irish operation into liquidation and the shops, closed due to the pandemic, were “not expected to reopen”.

“In these unexpected times Debenhams is having to make exceptionally difficult decisions . . . further communication about this process will follow from the liquidator in due course,” it added.

Valerie Conlon, shop steward in Patrick Street, Cork, who worked in women’s wear for 24 years, describes “disbelief that our jobs were gone. No warning. No consultations. No nothing”.

The first thought of shop steward Jane Crowe, who worked in the click-and-collect department in Dublin’s Henry Street, was: “‘How am I going to pay the mortgage?’ I am on my own with my son.”

Shock was followed by anger, Ms Conlon said. “We felt it had been done on a Holy Thursday of a long weekend, that Debenhams hoped by Tuesday it would all be forgotten. But they weren’t reckoning on a predominantly female workforce. By Saturday we had our fighting spirit.” Media and public representatives were contacted.

KPMG were appointed liquidators and “it was clear pretty quickly” the workers would not be receiving the four weeks’ pay per year of service (made up of two weeks’ statutory plus two weeks’ ex gratia) agreed with the company four years previously, Ms Crowe adds.

Under the 2014 Companies Act, when a business goes into liquidation its employees are on a list of creditors coming in after Revenue and the Department of Social Protection. Debenhams is understood to have owed these first creditors €18 million. The workers argued Debenhams Ireland had assets in its stock and fixtures that could be used towards honouring its commitments to staff.

Instead it seemed the company planned to leave Ireland, taking any assets with them. They believe Debenhams, which was in serious financial trouble, saw an opportunity in the pandemic to pull out of Ireland and blame it on the lockdown – Debenhams describes this assertion as “absurd”.

Nonetheless, Ms Gavin said: “It was a real shock that our employer could just walk away from an agreement. We decided it wasn’t acceptable. We would have to stand up and fight. That’s when we started our long campaign for the two plus two [redundancy pay].”

Socially-distant protests were organised which gardaí tried to prevent, describing them as “non-essential”; a factor in the decision to ballot for industrial action.

The vote on May 27th provided legal protection to pickets aimed at preventing KPMG removing stock – the only leverage employees felt they had. Pickets remain in place since, though KPMG has succeeded in entering stores sometimes with Garda assistance – most recently in Blanchardstown in the early hours of April 1st – despite Level 5 restrictions.

By September, Ms Conlon notes: “We felt things were going on and on and no one was taking any notice of us. Sit-ins were staged in the stores in Waterford; Henry Street, Dublin; and Patrick Street, Cork. A number of arrests resulted in Dublin, though no charges are expected.”

Each of the shop stewards who spoke to The Irish Times expressed frustration and even anger at their union leadership, whom they feel failed to support them. “Yes they organised the ballot and some protests, but they didn’t come to our pickets,” said Ms Crowe. “They didn’t even provide teas or coffees. Our picket was a two-minute walk from their head office. It’s very disappointing.”

Brian Forbes, Mandate’s national co-ordinator, acknowledges a distance between the paid officials and the strikers featured in the “difficult dispute”.

“In the early days of the pandemic, there were issues even around travelling to pickets. But it’s not true to say officials weren’t at the pickets. They were.”

A senior Mandate colleague, who did not want to named, said: “There were incidents where our staff felt they were verbally harangued and felt uncomfortable at pickets. Some political figures got involved. They did a lot to help the workers but some also did a lot to distance the workers from the union.”

Former Solidarity TD Ruth Coppinger, a constant presence at her local Blanchardstown picket, rejects assertions made in some quarters that the left “used” the strike for political ends. “It was the workers who approached us and who took the initiative to hold protests,” she insists.

Any political support was “welcome”, said Ms Conlon. People Before Profit and Solidarity were “very helpful” they say, with support also noted from Sinn Féin and the Social Democrats. “We are very strong women who decide ourselves what to do,” she said. “Certainly they gave us advice but we did it on our terms.”

The sit-ins saw the dispute referred for mediation by Labour Court chairman Kevin Foley whose December 15th report stated there were no assets to fulfil the 2016 agreement with the former workers.

The €3 million programme his report proposed was rejected in a ballot in January. A scheme more finely tailored to the workers’ wants and needs is expected to be balloted on in coming weeks.

“Just as important to us, as getting some kind of settlement, is ensuring this can’t happen to any other workers again,” said Ms Conlon. “This year has really opened my eyes to how badly workers are treated.”

They are calling for implementation of protections first recommended in the 2016 report by former Labour Court chairman Kevin Duffy and senior counsel Nessa Cahill, written after the sudden closure of Clerys and loss of 430 jobs.

The government-commissioned report on improving employees’ rights in insolvencies recommends liquidators consult with workers for 30 days to allow them to negotiate best possible redundancy terms and the State’s hand be strengthened in recovering payments towards redundancies from the company’s assets.

The fact it “remains sitting on a shelf five years on” is “shameful”, said Labour Party spokeswoman on employment, Senator Marie Sherlock. She too believes the Debenhams workers would have “benefited”, had it been implemented. “Serious questions have to be asked of the Government’s commitment to act on the report,” she said. “It is vital it is enacted given that thousands of redundancies are probably coming down the tracks.”

While legal protections for employees facing liquidation redundancies are important, said Mr Forbes, “there is no substitute” for workers “organising” into unions. “The employers are so well organised and the laws are on their side,” he said. “We need strike-ready workplaces across the country.”

A Department of Employment spokeswoman said: “The issue of continuing to ensure the effective protection of the rights of workers in the context of a collective redundancy on foot of insolvency is receiving active consideration within the department.”

A Debenhams spokesman said: “Debenhams Ireland made losses of over €40 million in 2018 and 2019, requiring substantial support from Debenhams UK. As a result of Debenhams UK going into administration, it could no longer support the Irish business, which left the directors with no option but to appoint a liquidator. Debenhams fully recognise the impact this decision had on its employees and partners in Ireland, and sympathise greatly with those affected, but regrettably there was no alternative.”

A spokeswoman for KPMG said the firm “does not wish to comment”.

Asked her thoughts on the past year, Ms Crowe said: “I’d say we surprised people. I think we proved just how strong a group of people can be when they feel strongly enough about something. We have a voice, we kept it out there and we stood our ground.”

Describing them as “exceptional trade unionists” Mr Forbes said: “Whatever the outcome of the talks about the €3 million, they have won. I do believe they will be written into the annals of Irish workers’ history. This dispute was not just about dirty money. It was about fairness and about recognition of the importance of workers.”