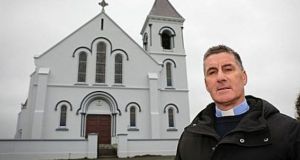 A parish priest in Co Cavan has accused gardaí of harassing him and churchgoers on Sunday as he went to celebrate Mass in breach of pandemic restrictions which do not allow public worship.

Fr PJ Hughes, parish priest of Mullahoran and Loughduff in Co Cavan, has already received a €500 fine following a Sunday Mass he celebrated on March 7th last in Mullahoran.

The priest has said he does not intend to pay this fine.

“They were annoying the people and they were talking strong, telling us all the figures that we are all feckin’ sick of listening to on the radio, of over 5,000 dead, as if nobody else died of anything else only Covid. Telling us that we were ‘creating a hot spot’ and yet nobody from this parish has died of Covid.”

He explained: “I went down to a house of have a cup of tea with a family before Mass and on my way back up, they blocked the three roads leading into the church. They stopped at the top of each road.

“They had four cars; three squad cars and a big white van. There were eight gardaí in all and one car in the car park at the church.

“One man who comes to Mass here with his son, that man rang and said ‘the guards are after stopping me and I won’t get Mass today’.”

Father Hughes said gardaí “don’t realise what they are doing. It is one thing about Covid but the chance of getting Covid here is very, very low and they are offending and hurting people now, mentally.

“The taxpayer had to pay eight guards yesterday, eight guards to come out to a small little place like Mullahoran, a rural setting where nobody has died from Covid.”

He said the officers had asked him “do I realise the numbers of people who are dying from Covid and that I could be responsible for passing Covid. It was the usual.

“They’re working for the HSE as well as the Government. The HSE message, you hear it every day on the radio. I was causing a situation for the spread of Covid.”

About 20, “maybe 21” people attended the Mass at Mullahoran on Sunday, while 10 had attended the Mass he celebrated in the second church in the parish at LoughDuff on Saturday evening. There were no gardaí present for this Mass.

Fr Hughes said he was not aware of reports that some people making their way to the Mass at Mullahoran had been fined for travelling beyond their 5km area. A Garda spokesman said it was not policy to give out details of numbers involved.

The priest also said he had not been contacted in recent days by Bishop of Ardagh and Clonmacnois Francis Duffy.

“No, nobody has been in contact with me. The Bishop has told me that I should close the doors but now there’s a more serious thing. The Government have announced that it’s a penal offence for a priest to celebrate Mass in public,” he said.

An online report in the Irish Catholic newspaper claiming this had been sent to him on Monday morning, he said.

“So now it’s over to the bishops. They have to respond to that. It’s more or less a kick in the teeth for the bishops and the Catholic church in this country.”

He noted how in the US “the churches are allowed to be half full, 50 per cent can enter the church. The church challenged the government and they got their rights, their constitutional rights. A half an hour from here people can drive up and go to Mass [in Fermanagh],” he said.

“People are respectful, people understand, people are not going to come in crowding into a church, they know, people are intelligent and at the same time they want to practise their faith,” he said.

As for himself “I am living my faith and if this Government who obviously don’t believe in God anymore, have no fear of God, have put in place these penal laws, they don’t affect me.

“They can put me in jail if they want but it will be for saying Mass not for committing a crime, for saying Mass, and it’s a sad day to think this Government has decided it is a criminal offence for priests to celebrate Mass in public for 10 people. My God I cannot believe that.”

Meanwhile, Independent Senator Rónán Mullen has called on Minister for Health Stephen Donnelly to clarify if organising, saying or attending Mass is “unlawful” or “just a matter of public health guidelines”.

Referring to the incident in Co Cavan Mr Mullen said “challenging people and levying fines in circumstances where there is doubt about what the law provides for, takes one into the area of harassment”.

He said the Minister told the Dáil in October that “’religious services are non-penal in that there is no penalty attached to them’ and yet we have a priest being slapped with a €500 fine”.

He asked Mr Donnelly during a debate in the Seanad on the Covid vaccination programme to state if it is a penal offence.

The Minister said he would get the Department to give Mr Mullen a written response to ensure he gets a “precise answer” to “a very reasonable and very important question about what is legal and what is advisory”.

Mr Donnelly added acknowledged that for many people not being able to attend Mass in person “is very tough for them. The only reason such restrictions are in place is to keep people alive.”