Data blog: Irish water charges to be cheapest in Europe 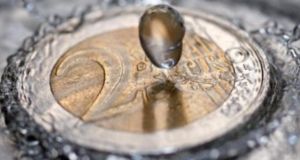 It may come as some small comfort to learn that the new charges regime means we will have the cheapest water in Europe, when measured on average water use.

This is because most European countries charge on the basis of metered use of water only, rather than flat-rate charges.

Under the revised system of charges, the maximum rate for a single-adult home will be €160 a year and €260 a year for a multi-adult household. Anyone who registers with Irish Water will be entitled to a €100 water conservation grant.

If you have a meter, your bill will either be based on your metered usage or fixed at a capped level, whichever is lower.

The only country which comes close to Ireland’s water charges regime is Bulgaria (€0.90).

The figures have been compiled by the Oxford-based firm Global Water Intelligence, whose figures are based on a family of four using an average of 15,000 litres of water a month – or 180,000 litres in a year – of combined water and wastewater.

The amounts are averaged on a selection of major cities in each country and are inclusive of taxes. The currency conversion figures were correct as of July 1st, 2014, and were first published in The Irish Times last November.

When the water charges are measured against average after-tax incomes, figures also show the Irish regime will be the most affordable in Europe.

The price for one cubic metre of water will account for 0.005 per cent of the average annual income in Ireland.

Water charges are almost twice as expensive – in relative terms – in Switzerland and Italy, while they are four times more expensive in the UK.

Water charges devour the biggest bulk of incomes in Romania, Poland and Croatia when measured against average incomes in those countries.

In Ireland, those who don’t pay won’t have their water cut off. But late payment penalties will accrue and provision will be made for a statutory charge on property. For tenants who don’t pay, landlords may be able to withhold water charges from tenants’ deposits. .