Analysis:The number of children living in consistent poverty has doubled during the recession 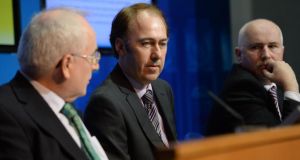 Families squeezed into hotel rooms, with nowhere for children to play because they have been priced out of their homes.

Children growing up in homes where parents can’t afford to turn on the heating, even in the depths of winter.

Youngsters going without meals or winter clothes because the family finances have been cut to the bone.

This is the reality of child poverty that professionals working with vulnerable families have been dealing with in recent years.

They didn’t need the Central Statistics Office’s survey on income and living conditions to tell them this. But yesterday’s publication has confirmed that child poverty has been rising sharply throughout the economic downturn.

The number of children living in consistent poverty – meaning they are living both at risk of poverty and experiencing deprivation – doubled from 6 per cent to just under 12 per cent between 2008 and 2013.

This means 135,000 children – or one in eight – are experiencing material deprivation on a daily basis.

This is not just a sad and inevitable legacy of the economic crash. Instead, political and economic choices were made that caused this, such as paying billions of euro back to unsecured bondholders while cutting health, education, housing and welfare supports.

Other countries, such as Chile and Poland, have done a better job of protecting children through their own “financial adjustments”, even under the watchful eye of the International Monetary Fund.

Long-term consequences The tragedy is that

the findings are not just a brief cause for concern which can be quickly reversed with economic growth. Instead, they will have long-term consequences that individuals and the wider society are likely to pay dearly for in the longer term.

“These are the children who may well be the early school leavers, the ones who will live a life of dependency and alienation. We know enough about this by now to realise that if we don’t break this vicious cycle its effects will last for generations.”

The hope is that the emerging scale of child poverty will be a wake-up call for policymakers. A Unicef report last year warned that those who do not end up in education, employment or training are in danger of long-term increased alienation, magnified disadvantages and lost potential.

Child poverty can be eradicated. But it will take the right policies and the right amount of political will. This means protecting children’s services and supports, ensuring that work always pays and supporting families with costs such as childcare and housing.