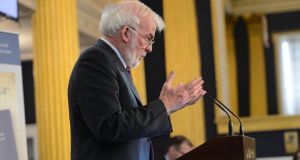 Constitutional convention chairman Tom Arnold: Mr Arnold said he was looking forward to a “fair and open” discussion where all members would have an equal say. Photograph: Dara Mac Dónaill


It is highly likely the constitutional convention will express views on topics that are not on the agenda given to it by the Government, convention chairman Tom Arnold has said.

The convention’s terms of reference set down eight topics for consideration but also empower the body to make other recommendations as it sees fit.

“I think it’s highly likely, because a number of the general interest groups who are involved in this process have said to us that the issues they are most interested in are not on our agenda,” Mr Arnold told The Irish Times.

“If we can get agreement on those, then I presume it would involve going back to Government and saying, ‘there’s an additional agenda here which the convention feels they want to discuss. Is that agreeable?’”

Some of the additional topics suggested to the convention relate to economic, social and cultural rights; the environment; and the place of God in the Constitution.


‘Fair and open’
Speaking on the eve of the two-day discussion on same-sex marriage, Mr Arnold said he was looking forward to a “fair and open” discussion where all members would have an equal say.

Three groups on each side of the debate have been invited to make presentations to the convention: the Catholic Bishops Conference, Evangelical Alliance Ireland and the Order of the Knights of St Columbanus will argue against same-sex marriage, while the Gay and Lesbian Equality Network, the Irish Council for Civil Liberties and Marriage Equality will support the proposal.

Explaining how organisations were selected, Mr Arnold said: “We had to make a judgment call about who would be the most representative groups, and taking into account the quality of the submissions... We have tried very hard to have a balance.”

Critics of the convention have complained that the presence of 33 politicians out of 100 members defeats the purpose of a citizens’ assembly.

However, Mr Arnold, who is chairman of the Irish Times Trust, said this had not been the experience so far. “I think the politicians have been conscious of the risk of this and have behaved very appropriately by and large,” he said.

“I think there’s also the basic issue of ownership and buy-in. I think the politicians who are involved in this are going away from the process and presumably telling other politicians, ‘it’s actually working’. So for later on, the chances of something coming out of this process are enhanced.”


No politicians
The secretary to the convention, Art O’Leary, said the experience in British Columbia, where a similar participative democracy initiative included no politicians, supported this view. “In British Columbia, there was no ownership from the political process, and they wished they had politicians in at an earlier stage because these citizens produced a report, sent it to the politicians, and they said, ‘this has nothing to do with us so we don’t have to get involved with it’,” Mr O’Leary said.

Asked if two days was sufficient to deal with such complex issues, Mr Arnold said: “It’s arguable that it’s not. At the same time, I think if you have a weekend that is properly structured, well organised, well run, you can get to a point of conclusion in one weekend. We don’t see the convention as being the end of the debate on any of these issues. But at the same time, it’s a substantial debate and I think the process – if it’s seen to be a process that broadly works – is going to make a significant contribution to public debate.”