Forgiveness a poor substitute for justice, but it can play a role in Ireland’s recovery 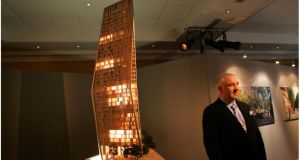 Sean Dunne with a model of the then proposed development on the site of the Jurys and Berkeley Court hotels in Ballsbridge. Photograph: Bryan O’Brien

Having just sought bankruptcy in the US, leaving behind debts of €185 million with State agency Nama, and a multiple of this with other creditors, he proclaimed: “I am truly sorry that any decisions I made contributed to any Irish person’s economic woes.”

And then he starting talking like a man accustomed to wandering about fairways. “If life is equated to a game of golf, I feel I still have the back nine to play,” he told the Sunday Independent .

“I can always say to anyone that we did our best and came up short but now we move on . . . As in golf, life itself is always about the next shot,” he told The Irish Times .

To extend the sporting analogy, Dunne’s “apology” is a bit like a clubhouse member taking divots out of several greens, crashing his buggy into the club captain’s Merc, running up a tab for champagne in the bar and then leaving a note to say he’d have stuck around a bit longer only someone presented him with a bill. (Oh, how we look forward to his next nine holes.)

Of course, Dunne’s motives can only be explained by the man himself. But what’s interesting about his intervention this week is how it conveys the very human desire to be forgiven, or at least “accepted” again by Irish society.

What’s more, it comes at a time when we are being asked to forgive on an industrial scale.

All this is exacting a toll on our emotions. Why? Because forgiveness typically offends the interests of natural justice. Its subversive nature is illustrated in the Bible story o f the Prodigal Son , a parable that you think you know until you reread it, as the sagacious priest at my local Catholic church said recently.

The story goes that a reckless spender returns home impoverished, and he’s showered with gifts. His ever-responsible brother, who never got a fatted calf, let alone an investment property, is understandably miffed.

In Luke’s gospel, their father tells the disgruntled one: “My son, you are with me always and all I have is yours. But it is only right we should celebrate . . . because your brother here was dead and has come to life; he was lost and is found.”

Now I’m not normally one for quoting scripture, but the story throws down a challenge to anyone who has resentments, jealousies or grievances. Right may be on your side but you have the power to subvert justice, and in the process you can set yourself free.

This week has given further cause for reflecting on forgiveness as concern lingers over the health of a man who is synonymous with the virtue, Nelson Mandela.


Feelings of hatred
“You can stay alive on your hatred. And I did, for many years,” Mandela says, in an introduction to a new edition of his autobiography,

Long Walk to Freedom . On the day he left prison after 27 years of captivity, he admits that his feelings of hatred welled up as he thought of all the indignities and suffering he had endured. “But as I got closer to the car that would take me away, I realised that when I went through that gate, if I still hated them, they would still have me. I wanted to be free. And so I let go.”

It strikes me that one of humankind’s greatest creations is forgiveness. Without it every war would end with genocide. With it we have, for example, a prosperous Germany at the heart of Europe.

In Northern Ireland, peace has been achieved through the gift of forgiveness – and it is best described as a gift. The givers have been people like the late Gordon Wilson who told a reporter just hours after his daughter, Marie, had been killed in the 1987 IRA bombing of Enniskillen: “I bear no ill will . . . Dirty sort of talk is not going to bring her back to life . . . I will pray for these men tonight and every night.”

Forgiveness is not a cure-all. It is sometimes a poor substitute for justice, a necessary stop-gap where justice can’t be achieved or administered.

By this definition, forgiveness has a role to play in Ireland’s recovery, ideally in the context of some sort of peace and reconciliation process. Imagine the cathartic effect of South African-style hearings where developers and bankers, tax exiles and street traders, patients on waiting lists and carers who’ve lost respite hours, crippled borrowers and ghost estate residents, and maybe even the odd politician, would meet face-to-face in public and speak directly about their hurt.

To get people in the same room, though, you’d need to get them in the same country first. The protagonists in our national trauma aren’t even on the same planet. We’ve a long way to go until we have peace.