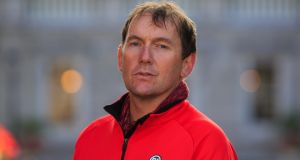 The Government amendment last night refers to “assisted suicide” but the Dublin West TD Gino Kenny who proposed the Bill said it was irresponsible to conflate assisted dying with suicide, which had very different connotations. Photograph: Gareth Chaney/Collins

A clear majority of voters say they are in favour of allowing people to be given medical assistance to end their lives, suggesting that there is public support for the Bill currently before the Oireachtas.

Last night the Dáil rejected a Government amendment to stall the progress of the Dying with Dignity Bill in order to allow for further discussion of the issue and voted instead to let the Bill proceed through the normal legislative process immediately. Government TDs had a free vote on the issue.

The findings of today’s Irish Times/Ipsos MRBI opinion poll suggest that TDs are in tune with the current public mood on the question.

Respondents to the poll were asked which of three statements came closest to their view on the subject of assisted dying.

Over half of all voters (52 per cent) said that they agreed that “It should be legal for people to be given medical assistance to end their lives if that is their wish”.

Support was highest among voters in the 35-49 age bracket, where 61 per cent of respondents backed the change, and among the wealthiest AB voters, where 68 per cent are in favour.

The oldest voters (the over-65s), the least well-off and farmers were the least supportive, though even among these cohorts, 44-45 per cent were in favour.

Just 17 per cent of voters are opposed to the move outright, agreeing with the statement: “It should not be legal for people to be given medical assistance to end their lives if that is their wish.” Even among the over-65s, just 29 per cent of voters agree.

However, there is also a substantial middle ground which has yet to make up its mind on the issue. Just over a quarter of all voters (26 per cent) say they are “undecided on the issue but am open to hearing both sides of the argument”. Five per cent said they had no opinion.

The poll was taken Saturday-Tuesday, October 3rd to October 6th, through in-home interviewing among 1,200 adults at 120 locations in every constituency. The accuracy level is estimated at plus or minus 2.8 per cent. This poll saw a return to the usual face-to-face methodology, after June’s poll was conducted via telephone interviews due to the pandemic.

The Government amendment last night refers to “assisted suicide” but the Dublin West TD Gino Kenny who proposed the Bill said it was irresponsible to conflate assisted dying with suicide, which had very different connotations. He insisted the Bill does not allow for assisted dying in cases where the person looking for help does not suffer from a terminal illness.

However, campaigners against the measure warn that making it legal for people to help terminally ill people to end their lives will inevitably lead to pressure on people to take the option. The Bill now moves to the committee stage of the legislative process. After that it will return to the Dáil for its final stage, before being sent to the Seanad where it will undergo a similar process. If TDs and senators back the Bill, it could become law next year.