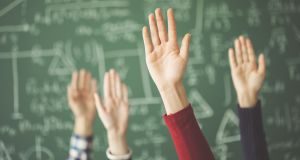 Inclusion Ireland says reduced timetables are being imposed disproportionately on children with special needs as a means of ‘behavioural management’. Photograph: iStock

Children, many of them disadvantaged or with special needs, are being denied their education by being placed on “reduced timetables” at school, an Oireachtas Committee will hear later this month.

The Committee on Education will hold two days of hearings on the practice, described by groups representing Traveller and special needs children as a “growing crisis” and “illegal”.

It involves schools reducing the hours a child may attend, sometimes to as a little as 30 minutes a day, and usually to “manage a behavioural issue”.

Though a reduced timetable should “not be used” to manage behaviour, according to the Department of Education and should be used only with parents’ consent, groups like the Irish Traveller Movement (ITM), Inclusion Ireland and the autism advocacy organisation AsIam say it is being used widely to manage behaviour, and at times without parents’ consent.

The practice has also been described as “endemic” in disadvantaged areas like Ballymun, Finglas and the north inner-city in Dublin.

And as the children are marked “present”, their reduced hours are not reported to the education welfare section at Tusla or the Department of Education. Neither body collects any data on how widespread the practice is.

In its submission, the Irish Traveller Women’s Forum says reduced timetables have “become a major concern” and “a practice that is resorted to far too easily, not as a last resort”.

All Travellers’ groups say parents can feel compelled to accept reduced hours for their children, and all call for legislation to compel schools to report when and for how long a child is put on reduced hours and for an ethnic identifier to be included in any data collection.

Inclusion Ireland, which supports families of people with intellectual disabilities, says reduced timetables are being imposed disproportionately on children with special needs as a means of “behavioural management”.

“However, the practice of placing children on reduced timetables has no evidence base in policy or in research,” says its submission. It is calling for an end to the practice for children with disabilities, a direction that schools record and report their use of the practice, and greater training and resources for teachers to manage children with special needs.

AsIam says the reduced hours timetables are “illegal” and the practice is reaching “crisis” levels.

“Additionally, as population and diagnosis rates increase, it is important to understand this issue as one which will only grow if we do not take decisive action now.”

It makes 22 recommendations for bodies, including the Department of Education, teachers’ unions and schools’ boards of managements, including that robust data on expulsions, suspensions, reduced timetables and absences be collected nationally. It says parents should be able to engage directly with their local Special Educational Needs Officer where their child is threatened with a reduced timetable.