Council publishes fresh tender for over 150 units in areas including Drimnagh, Finglas 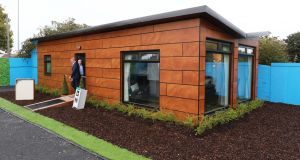 In Poppintree, Ballymun, 22 units are expected to be completed and operational within the coming weeks

Housing charities say it is “extremely disappointing” that 131 modular houses across Dublin will now not be finished until autumn as part of a new tendering process.

Dublin City Council on Wednesday issued a fresh tender for the construction of 153 modular housing units across various locations including Poppintree, Drimnagh, Belcamp, Ballyfermot and Finglas.

Whereas the 22 units in Poppintree, Ballymun, are expected to be completed and operational within the coming weeks, the original public tender for the remaining 131 units specified that they would be completed by 30th June.

However, as reported in The Irish Times, insufficient registrations of interest for the original tender meant it had to be cancelled, and the Dublin Simon Community has expressed its dissatisfaction at the new autumn completion date.

“January alone saw 125 new families presenting as homeless in the Dublin region and as these delays continue, without a tangible, achievable plan in place, there is little hope that their stay in emergency accommodation will not become long term,” he added.

Reacting to the news that the emergency accommodation solutions will not come on stream until the latter half of this year Senator Aideen Hayden, chairwoman of housing charity Threshold, said the delay is “incredibly disappointing” but believes the new autumn date is achievable.

“Every unnecessary day that goes by is a day longer that a family has to live in an unsuitable housing option,” she said.

She continued: “I do understand that there are always glitches with a new strategy, but we’re down the road a fair bit now and you would expect to see things getting sorted at a more rapid rate.

“Given the speed with which these houses can be erected, it does seem like a very long time to deliver what was meant to be an emergency response. When they say autumn I want them to mean the earliest possible date that they can achieve.”

Sinn Féin Cllr Daithí Doolan, who is chairman of the council’s strategic policy committee, said it was necessary to extend the completion date as it was not possible that all the sites would be finished in time to satisfy the terms of the original €20 million tender published last December.

Failure to complete the units by June 30th may have left the council open to potential legal action by disaffected prospective bidders who were initially unwilling to commit to the tight deadline, he said.

“It’s unfortunate that we’re not getting this modular housing on the date that we thought. The focus needs to be to deliver them as a matter of urgency as quickly as possible, to make sure families are moved out of hotels and B&Bs and other precarious emergency accommodation premises,” he said.

He expects that all 155 units should be completed by September.